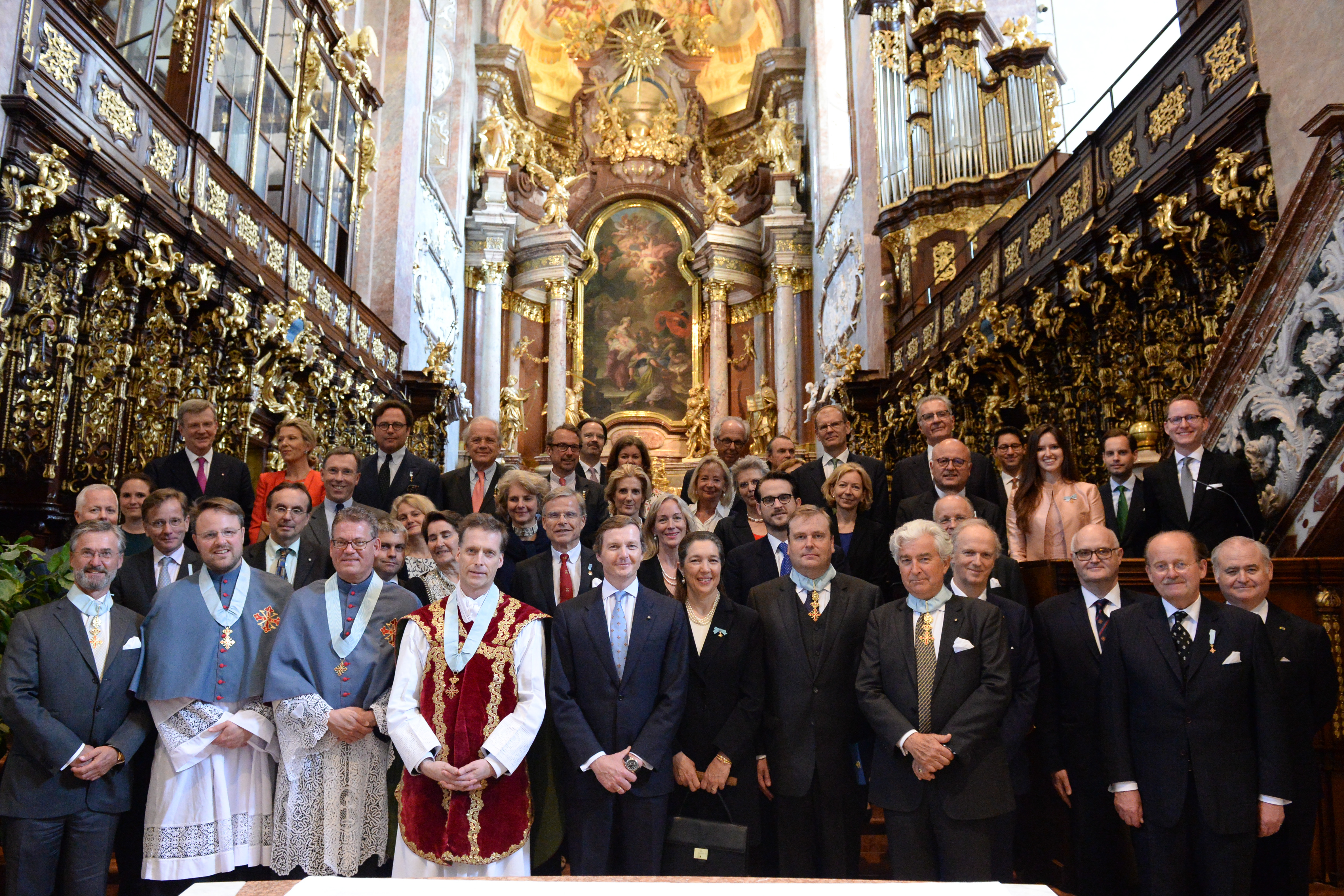 In the presence of H.R.H. the Great Master, Prince Don Pedro of Bourbon-Two Sicilies, Duke of Calabria, the Royal Commission of  Austria and Liechtenstein carried out an investiture ceremony into the Constantinian Order of St. George on 5 June 2019. There were present also T.I.&R.H. Archduke Simeon of Austria, Royal Prince of Hungary and Bohemia, President of the Royal Commission for Austria and Liechtenstein, and his wife Archduchess Maria of Austria, Princess of the Two Sicilies, Vice-President of the Royal Deputation of the Order for Austria, Germany and Liechtenstein.

The investiture took place in Klosterneuburg near Vienna, which is the site of Saint Leopold’s, the Austrian Patron-Saint’s, burial place. The monastery also houses the Archducal hat which was originally donated as a crown for the Saint’s remnants, and which found use at the hereditary homages in Vienna until the 19th century.

Before the investiture, the Order organized a visit at the Monastery’s current exhibition centring around Saint Leopold and Emperor Maximilian I. whose death-day reaches its 500th anniversary this year.

The actual investiture in the church evoked the grand era of Emperor Charles VI, the father of Empress Maria Theresia, who took the Escorial’s mixture of monastery and residence as a role model in redesigning the Klosterneuburg Monastery according to Baroque aesthetics.

As usual, the investiture was embedded in a Holy Mass led by Nicolaus Buhlmann CanReg, the Order’s chaplain in Austria. In his homily, he guided the participants’ attention towards the high altarpiece’s religious components which are to find a dignified place in the spirituality of our daily lives, for a community such as the Constantinian Order of St. George will be measured according to its members’ everyday practices.

The participants of the investiture took their seats in the choir stalls of the Monastery church. Their distinctiveness consists in their depiction of all emblems of the House Habsburg, namely of both the Spanish and the Austrian branch.

The investiture ceremony proceeded with solemnity. The Royal Commission Austria and Liechtenstein received four new members, in addition to one clergyman who was admitted to the Delegation Germany during the same ceremony. The delegate for Germany, the Hereditary Prince Emanuel zu Salm-Salm, was thus likewise present to the delight of all participants.

After the ceremony which was personally conducted by H.R.H. Prince Don Pedro de Borbón, the decrees were handed out in the prelature’s Baroque rooms.

To the honour of the High guests and of all the newly invested, the Ambassador of the Kingdom of Spain, H.E. Juan Sunyé Mendía, gave a dinner in the rooms of the Kingdom’s Embassy. These diverting hours passed quickly, during which all members of the Order were able to exchange their thoughts and reflections. 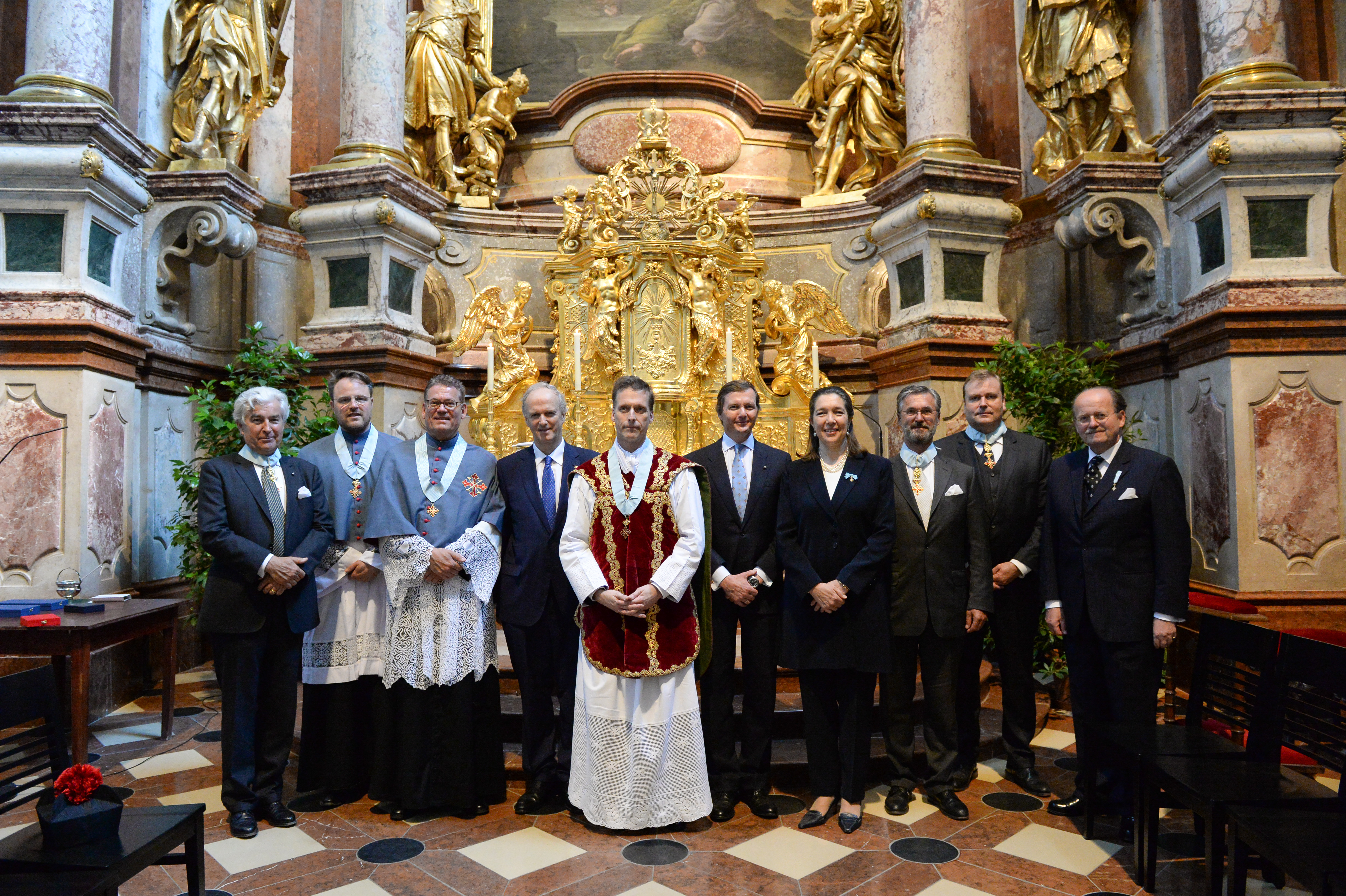 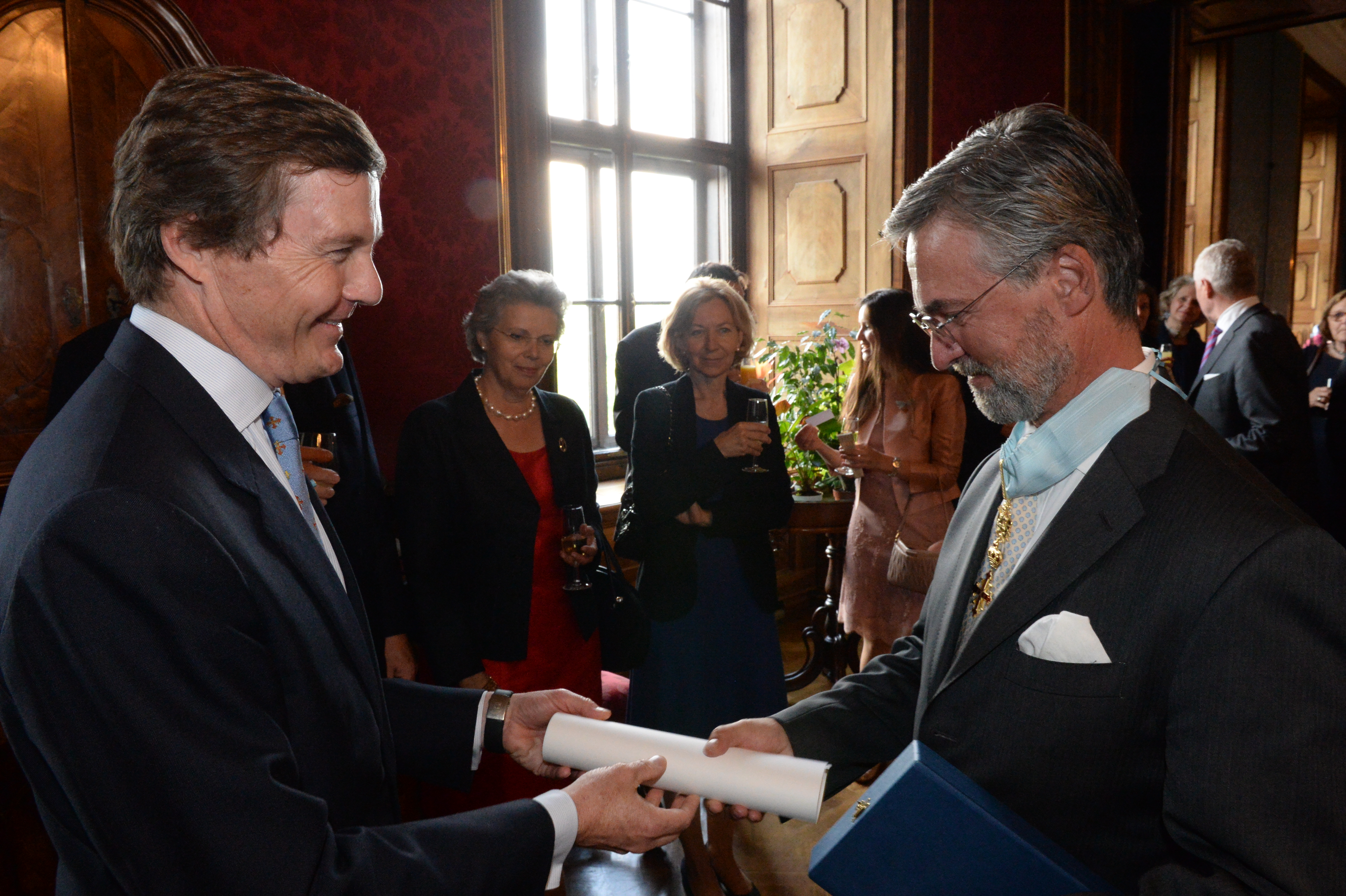 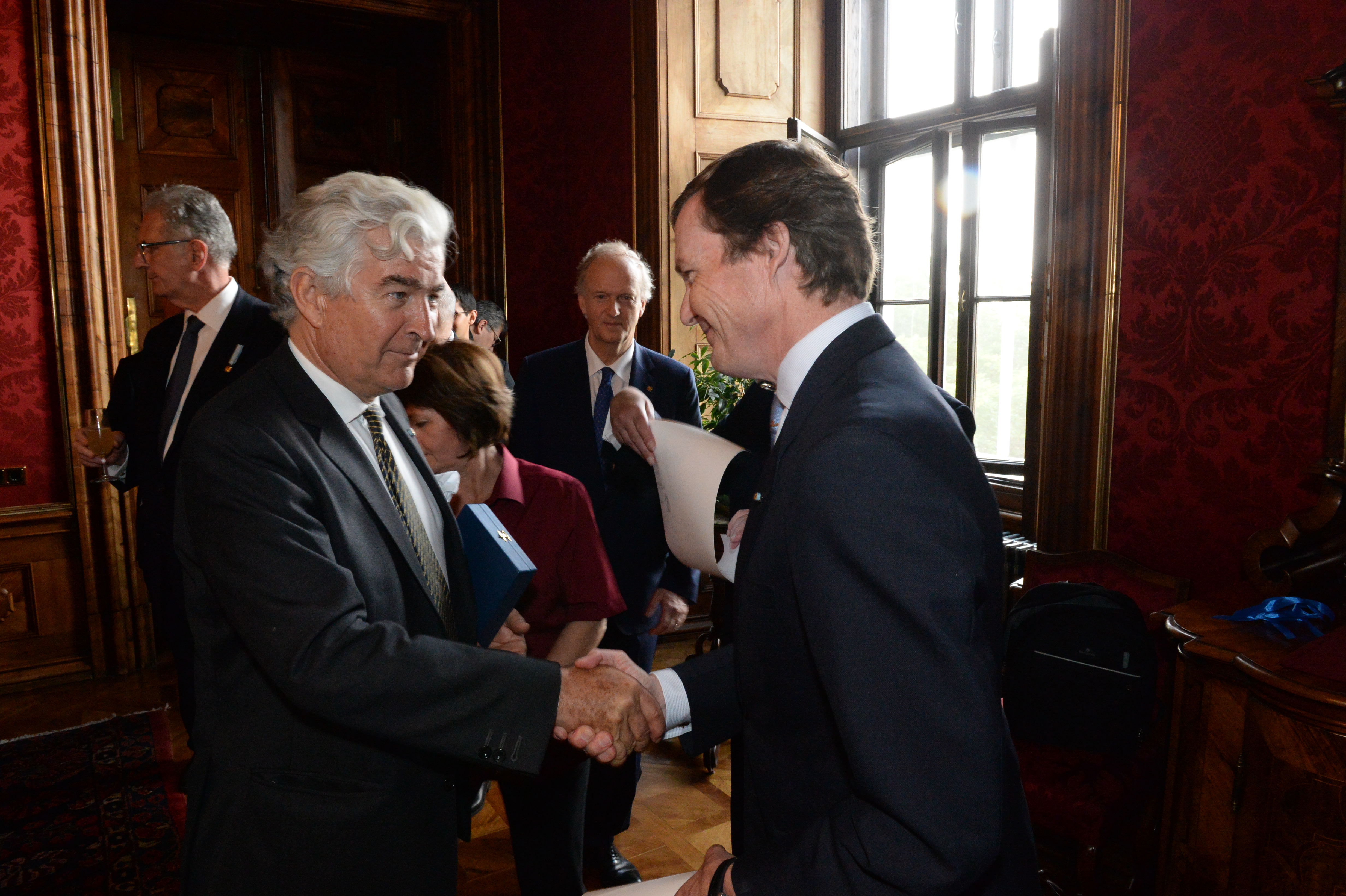 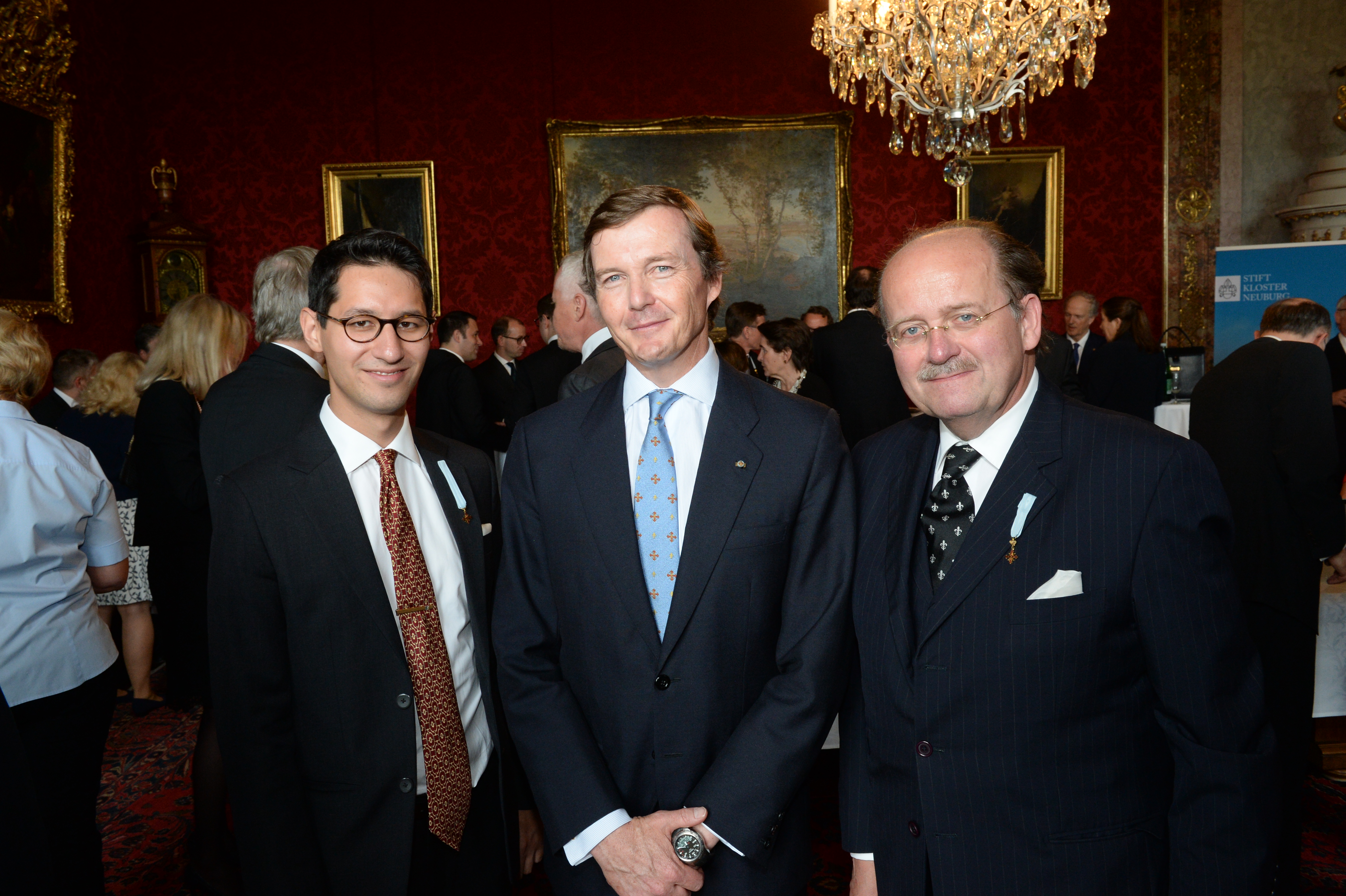