This request, accepted by the Duchess of Cardona, was presented to her in the Chapter Room of the Metropolitan Cathedral of Barcelona at the end of the Ceremony of Investiture of new members of the Order, in which the Duchess herself swore and received the badge as new member of the Sacred Militia. 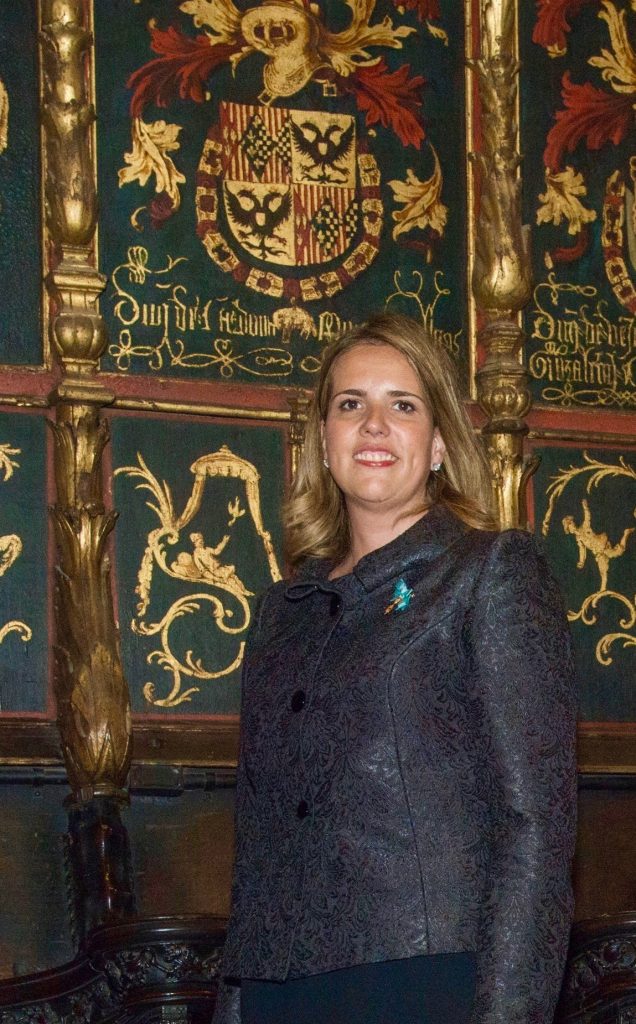 The XXI Duchess of Cardona, Dame of Justice of the Constantinian Order, occupying the seat of her ancestor the II Duke of Cardona in the Choir of the Golden Fleece (1519).

The Delegate of the Order in Catalonia, in his brief speech, recalled the importance of the Ducal House in the History of the Principality of Catalonia. The Duchess of Cardona, accepted the honorific title of protector, and noted her joy at having been able to join the Order, in Barcelona, especially in this time of serious political difficulties in the old Principality. 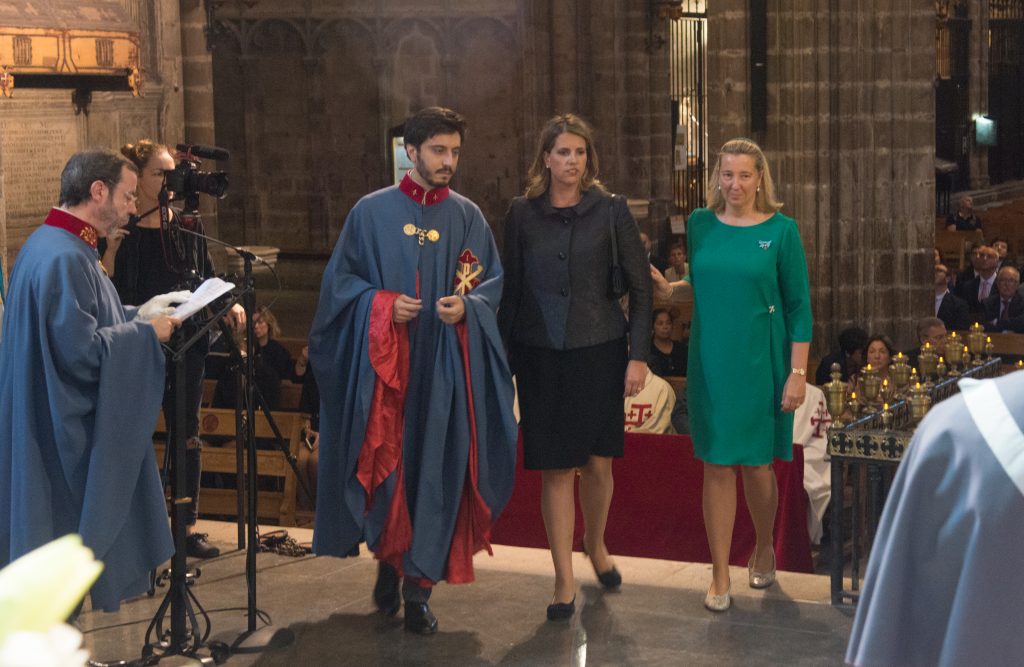 HRH The Princess Dª Christina of the Two Sicilies, Great Chancellor, accompanies to the Presbytery the Duchess of Cardona, as her godmother. 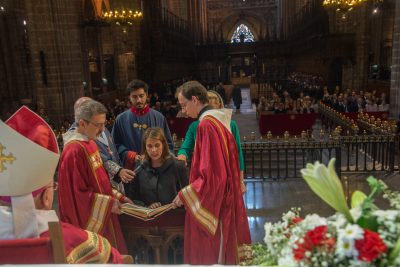 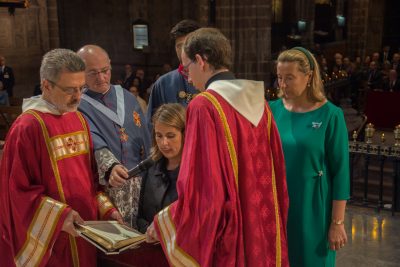 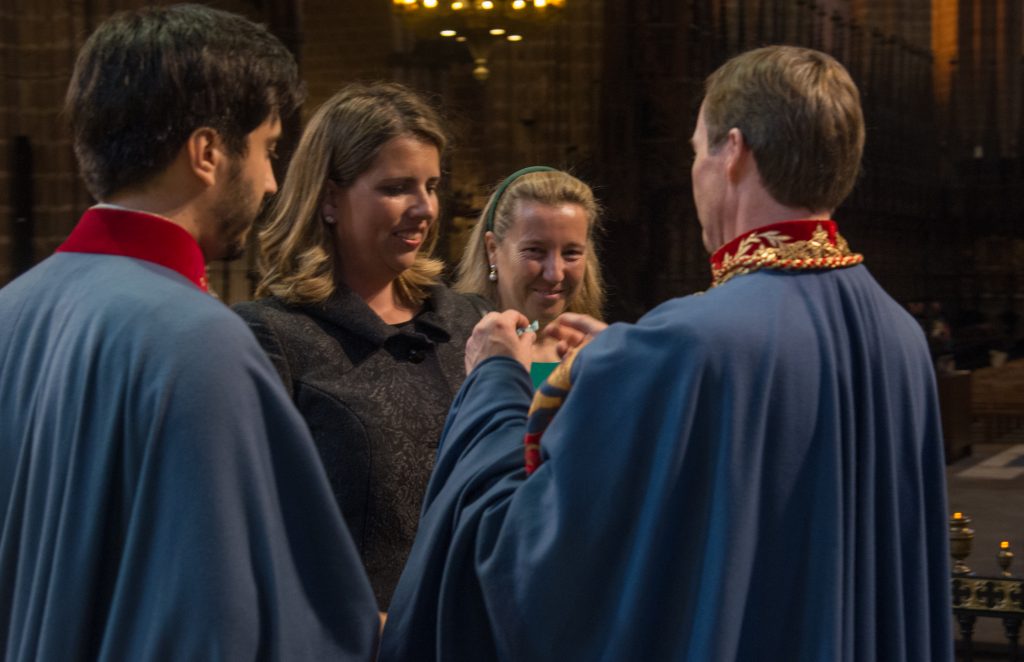 HRH The Duke of Calabria, Grand Master, imposes the badge of Dame to HG The Duchess of Cardona. 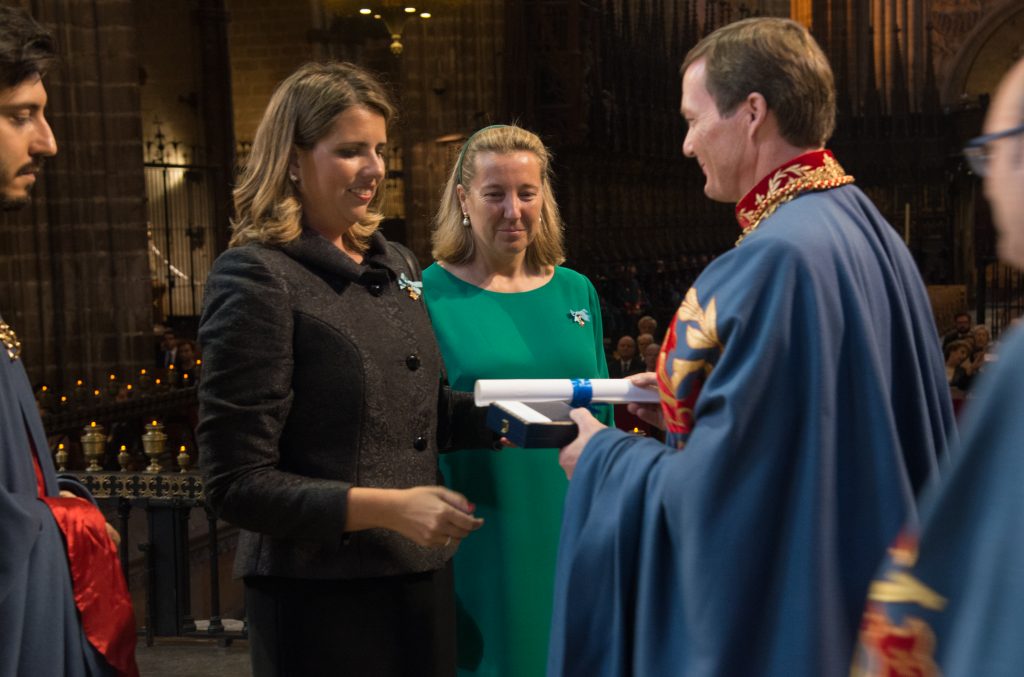 HRH The Grand Master gives the diploma and badges to the HG The Duchess of Cardona.

Doña Casilda-Ghisla Guerrero-Burgos y Fernández de Córdoba, XXI Duchess of Cardona and Grandee of Spain, succeeded her mother in the title in 1998. Her father, Mr. Antonio Guerrero Burgos, Duke consort of Cardona, was Bailiff Grad Cross of Justice of the Sacred Militia, he was decorated with the Collar, and was Head of the House of the Infant Don Alfonso, Duke of Calabria and Grand Master.

HG The Duchess of Cardona, Named Patron of the Royal Delegation of Catalonia.

The House of Cardona goes back to the early Middle Ages. The first members of the lineage were the viscounts of Osona, in the ninth century. From 1082, the Cardona used the title of viscounts of his name. In 1375 the king Don Peter IV of Aragon called “the Ceremonious” elevated the viscount to earldom. Later, in 1491, Ferdinand the Catholic created his relative Joan-Ramon Folch of Cardona, I Duke of Cardona. The Duchy remained in the original lineage until in the sixteenth century it passed to a minor branch of the Royal House of Aragon, the Counts of Ampurias and Dukes of Segorbe (1564), where it remained until to the Fernández de Córdoba (1608), Marqueses of Comares, although these preserved the patronymic “Aragon and Folch de Cardona” while the title remained in its lineage (1608-1697). At that time the heritage of the Ducal House had the 6% of the land in Catalonia. In 1697 the title, together with the House’s heritage, went to the Ducal House of Medinaceli and remained there until, in 1950. It was granted to the XX Duchess of Cardona, being again separated and exempt from others as an own title (returning to the situation prior to 1564). For being one of the oldest lineages of the Principality and the first (and for a long time only) Duchy in Catalonia, the Dukes of Cardona were primate of the Nobility of Catalonia and Presidents of the Lords Chamber in the Cortes, also enjoying a particular rank between the princes of the Royal House (to which they belonged from 1564) and the other Grandees of Spain. 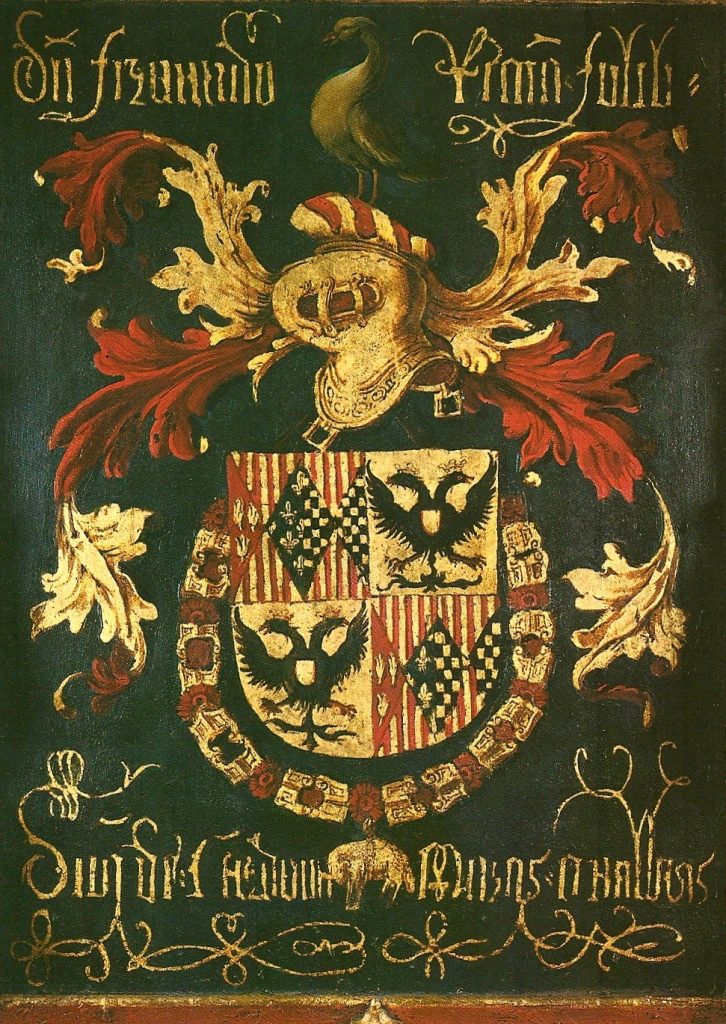 Coat of arms of Don Ferran-Ramon Folch of Cardona, II Duke of Cardona and Marquis of Pallars in the stalls of the Chapter of the Order of the Golden Fleece (1519) in the choir of the Cathedral of Barcelona.