Tricentenary of Charles III: Presentation of the Epistolary of the Queen María Amalia de Sajonia in Barcelona 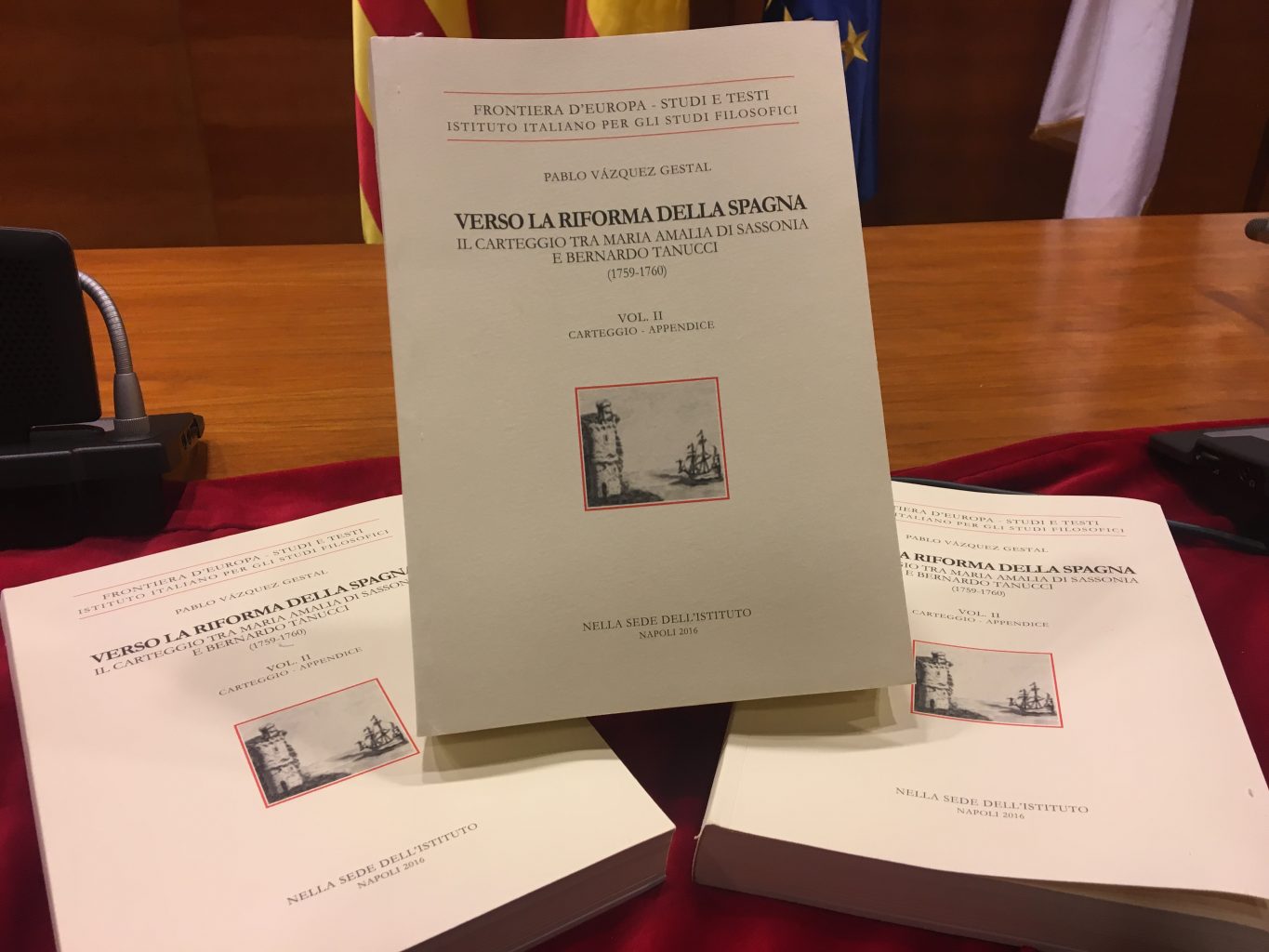 Within the activities of the Tercentenary of Charles III organized by the Constantinian Order, the presentation of the book VVerso la Riforma della Spagna. Il carteggio fra Maria Amalia di Sassonia and Bernardo Tanucci (1759-1760), was held in the Conference Room of the of the Crown of Aragon’s Archive, in the Palace of the Viceroys (Barcelona).), by its author, professor D. Pablo Vázquez Gestal. 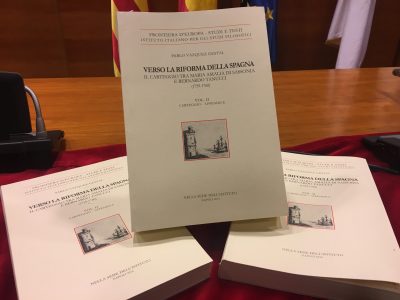 The work, which consists of two volumes, has been published in Naples by the Istituto Italiano per gli Studi Filosofici, in 2016. It’s part of the collection “Frontiera d’Europa. Studi e testi “, directed by professor Raffaele Ajello, one of the world’s leading specialists in King Charles of Bourbon and his reign in the Two Sicilies. Ajello is the author of a long introductory essay to the work, which opens the first volume, entitled “La Nascita della Socialità Moderna“. In this first volume there is also an extensive study carried out by the scientific editor of the tutorial, professor Vázquez Gestal, currently a researcher linked to the Sorbonne University. 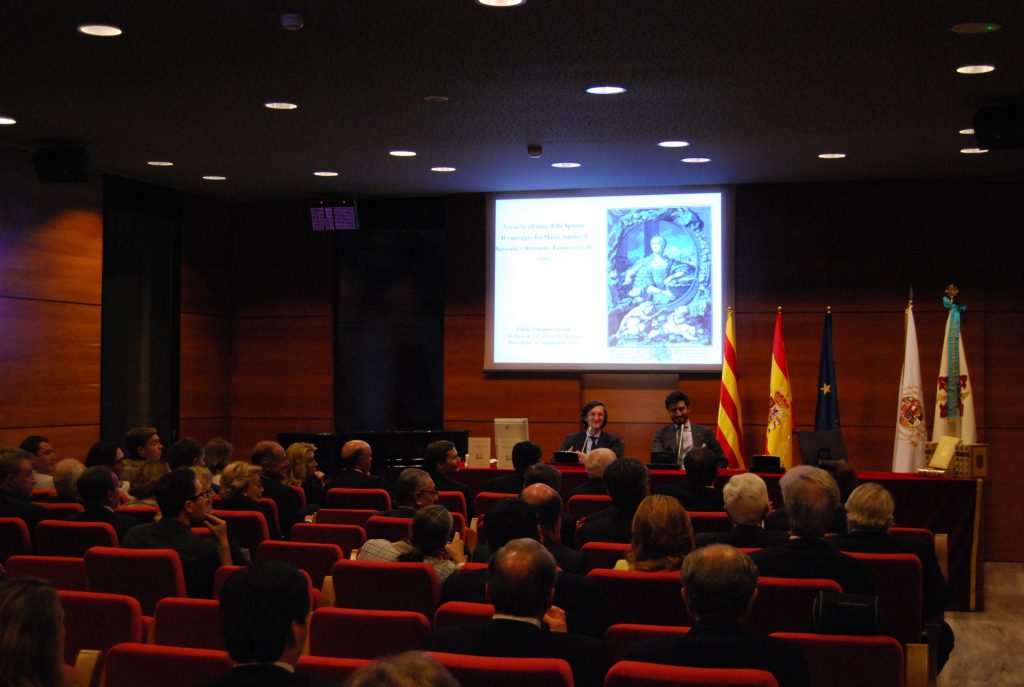 The second volume contains the full text of the correspondence between the sovereign who was of the Two Sicilies (1738-1759) and then of Spain (1759-1760), Maria Amalia Walburga of Saxony (1724-1760); and the Tuscan prime minister who ruled the Monarchy of the Two Sicilies during the first period of the reign of Ferdinando IV, by order of Charles III. It has a very important critical apparatus and several dozen pages of annexes.

The author was introduced by Daniel Aznar, Commissioner for the Commemoration of the Tricentenary of Charles III, and Secretary General of the Royal Commission for Spain of the Constantinian Order (who is also an associate researcher at the Sorbonne University). 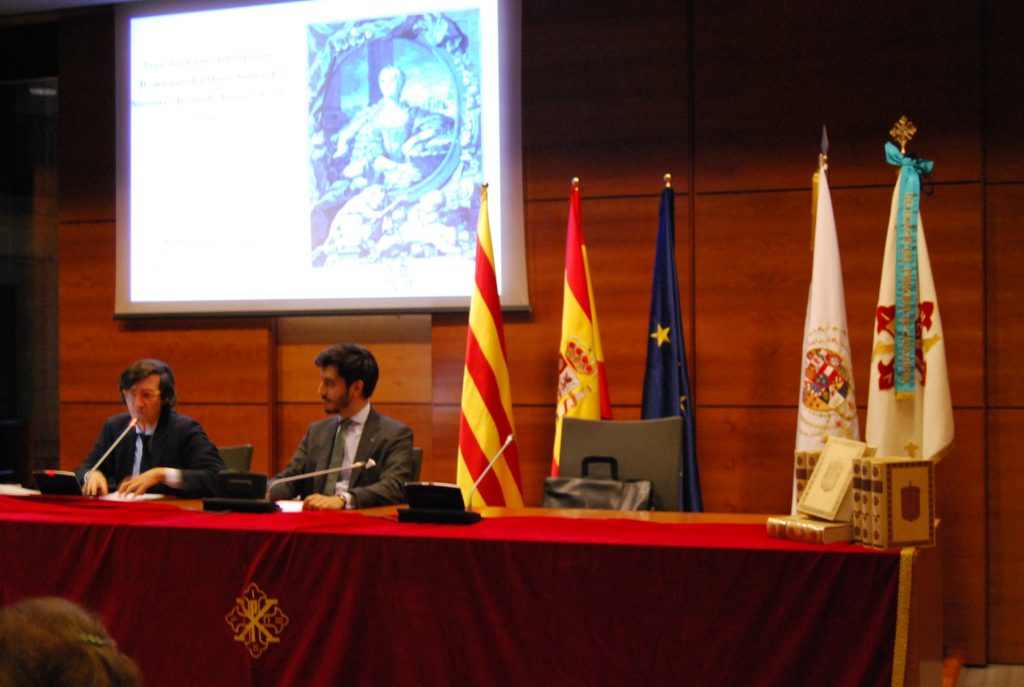 Before presenting the author, Daniel Aznar, addressed a few words to attendees in which he took stock of the activities carried out during the Constantinian period of Charles III, evoking the active involvement of HRH The Grand Master in them. He highlighted the freqüent visits of the Duke of Calabria to Catalonia, a particularly remarkable reality in consideration of the Catalan political crisis of recent times. 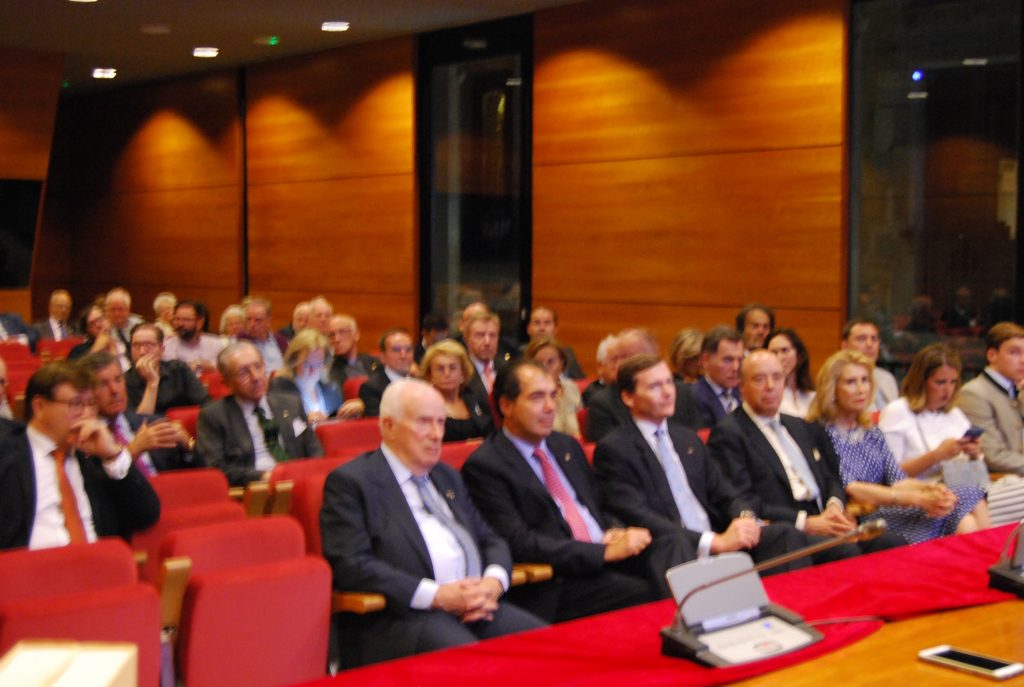 View of the attendance to the act. In the first row, HRH The Duke of Calabria, Grand Master; to HRH The Prince Charles Emmanuel of Bourbon-Parma, President of the Royal Commission for France; HG The Duke of Hornachuelos, President of the Royal Commission for Spain; and the Nob. Gian Marino delle Piane, Delegate of the Order in Liguria and Piedmont.

The event was attended by HRH The Grand Master accompanied by the Presidents of the Royal Commissions of Spain and France, HG The Duke of Hornachuelos and HRH Prince Charles Emmanuel of Bourbon-Parma, and other members of the Royal Deputation, and numerous representatives of the Order in Spain and Italy. HI and RH The Archduke Johannes of Austria, nephew of the Grand Master was also present.

Among the attendees also had a numerous representation of the university and intellectual world as well as other representatives of the Barcelona and Spanish society.

At the end of the act a Spanish wine was served in the High Gallery of the Palace. 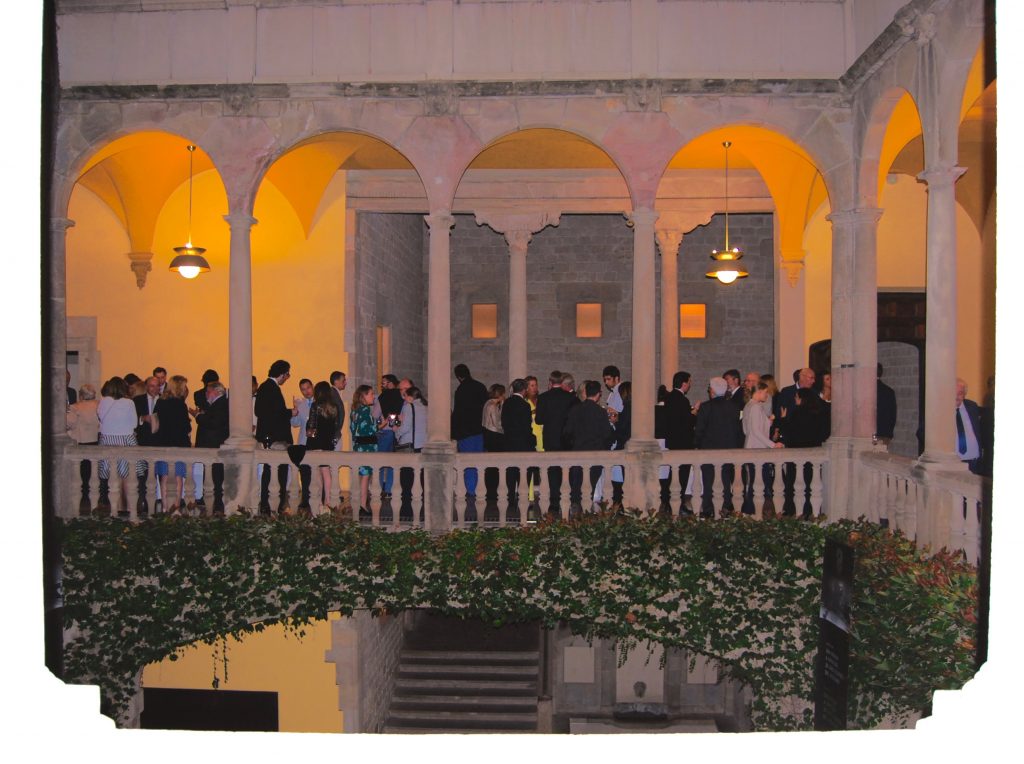 The first Queen of the Two Sicilies, founder of the current Dynasty of the Grand Masters

She was daughter of Frederick August II, Elector Prince of Saxony and later King of Poland and Grand Duke of Lithuania (as August III); and Archduchess Maria Josepha of Austria, daughter of the Emperor Joseph I.

With hardly fourteen years old she contracted marriage with Charles, then King of the Two Sicilies and of Jerusalem. Although it was an arranged marriage, Amalia and Charles remained very close, and the King, when he widowed, did not remarry. The wedding was held by proxy at the Dresden Palace in Saxony on May 9, 1738 and the celebration was in Naples on June 9 same year.

In 1759, King Ferdinand VI of Spain died, Charles’s brother, without offspring, and Amalia accompanied her husband to Spain to occupy the Throne. Queen Maria Amalia is due for the introduction in Spain of the Christmas custom of the Nativity scene or “birth” of Neapolitan origin (Il preseppe).

In September 1760, just two years after her arrival in Spain, Maria Amalia died of tuberculosis. Charles III said: “In 22 years of marriage, this is the first serious dislike that Amalia gives to me.”

The Epistolary of Queen Amalia with Bernardo Tanucci, published by Vázquez Gestal, corresponds to the year elapsed between the Sovereing’s departure of Naples and her death.

Maria Amalia Walburga of Saxony (1724-1760), Royal Princess of Poland and Saxony, Queen of the Two Sicilies (1738-1759) and Spain (1759-1760). Engraving by Lorenzo Zucchi according to a portrait by Louis Silvestre (National Library of Spain). Work present at the Exhibition “Charles de Bourbon. From Barcelona to Naples “, organized by the Constantinian Order in Barcelona.

Pablo Vázquez Gestal is one of the greatest specialists of Charles III, standing out among the historians of his generation. His research has focused on the representation of royal majesty in the kingdoms of Naples and Spain during the latter part of the seventeenth century and the eighteenth century. He is the author of two monographs, the last of which is dedicated to another monarch of the House of Bourbon, Philip V and his wife, Isabella Farnesio (Una nueva majestad. Felipe V, Isabel de Farnesio y la identidad de la Monarquía. 1714-1729. Madrid, Marcial Pons-Pablo de Olavide Foundation, 2013).

Vázquez Gestal has been part of the Scientific Committee of the Third Centenary of Carlos III organized by the Constantinian Order and the Royal Commission for Spain.

The charital dimension of a cultural initiative

Professor Vázquez Gestal, author of the work, made a generous donation of part of the edition of the work in favor of the Constantinian Order for charitable work of the Sacred Militia (fundamentally to the campaign of restoration of the Church of Santiago de los Españoles in Naples).

H.I. and R.H. The Archduke Johannes of Austria, invested Knight Grand Cross of Justice in Barcelona
01/08/2019
Go to Top