Investiture Ceremony at the Cathedral of Barcelona

HRH The Duke of Calabria, Grand Master, attended at the Cathedral of Barcelona a solemn inauguration of new knights of the Order, accompanied by HRH The Princess Dª Christina, Grand Chancellor, the Presidents of the Royal Commissions of Spain and France, as well as a large group of knights from all over Europe. 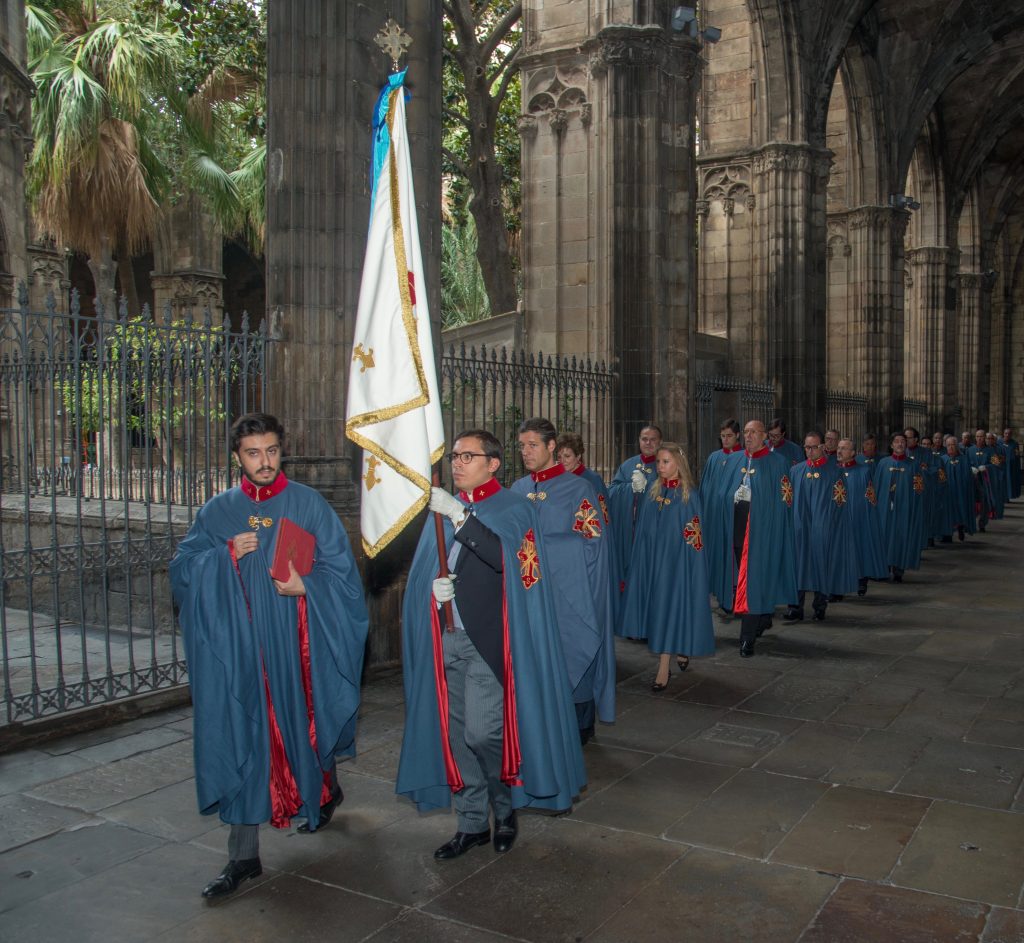 The Metropolitan Basilica Cathedral of Barcelona hosted the Ceremony of Investiture of new Knights, Dames and Ecclesiastics of the Sacred and Military Constantinian Order of St. George.

The Sacred Rites were presided by the Hon and Most Rev. Monsignor Don Jaume Traserra y Cunillera, Vice-Grand Prior of the Order and Bishop Emeritus of Solsona.

Delegates and members of the Royal Deputation in the Cloister

HRH The Duke of Calabria, Grand Master, attended the Ceremony, accompanied by HRH The Princess Christina of the Two Sicilies, Grand Chancellor of the Order, by the Presidents of the Royal Commissions of Spain and France, HG The Duke of Hornachuelos and HRH The Prince Charles Emmanuel of Bourbon Parma. For the Royal Diputación they also attended the HE D. Francesc-Xavier Montesa i Manzano, Vice-President of the Royal Commission for Spain and Delegate in the Principality of Catalonia, HE D. Amadeo-Martín Rey y Cabieses, Vice-Grand Auditor, HE D. Carlos Bárcena y Portolés, Counselor and Ambassador of Spain and the Mst. Il. Mr. D. Daniel Aznar y Martínez-Albacar, Secretary of the Royal Commission for Spain.

The members of the Order followed the Solemn Rite occupying the seats of the XIX Chapter of the Order of the Golden Fleece (built in 1519 by order of the Emperor Charles V), in the choir of the temple.

HRH The Grand Master, accompanied by the Presidents of the Royal Commissions and the Delegate in Catalonia, made his entrance while played the chords of the “Inno al Re”, the anthem of the ancient Kingdom of the Two Sicilies.

View of the Ceremony from the temple nave.

After the homily delivered by the Hon and Most Rev. Vice-Grand Prior, the Delegate in the Principality of Catalonia and Vice-President of the Royal Commission of Spain, addressed a speech to the neophyte members of the Order in which he also remembered the duties of the Cavalry, some milestones of History of the Order, as well as the roots of the Sacred Militia in Catalonia. Later on, the Hon and Most Rev. Vice-Grand Prior took the Faith profession to the neophyte knights. 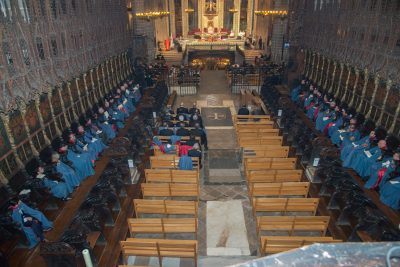 View of the Cathedral Choir. 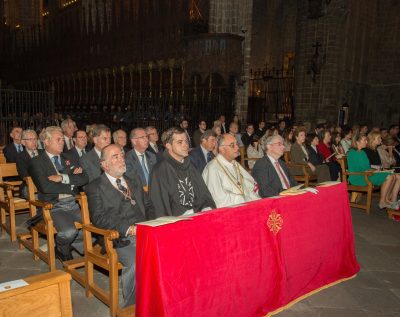 View of the authority’s area.

Profession of Faith of the Neophytes.

Then, the rite of investiture of the new knights, dames and ecclesiastics was carried out. Each of the new members of the Order was accompanied to the presbytery by his godfather and, there, kneeling in front of the Vice-Grand Prior, he took an oath on the Holy Gospels as a Knight or Dame (ecclesiastical members being exempt from this rite). Then, the gentleman or dame sworn, was wrapped by the coral mantle of the Order by his godfather to, finally, compliment HRH The Grand Master, who symbolically knotted the mantle fittings and gave him the diploma and badges. After the rite of investiture, the new knight or dame of the Order was accompanied to his place in the choir of the Cathedral, with his new brothers in habit.

In addition to the knights, dames and ecclesiastics invested, the medals of the “benemerenza” commemorating the Jubilee of Mercy were handed over to the knights who had participated in the pilgrimage, carried out by the Order on April 2016.

Oath of H.I. and R.H. The Archduke John (Johannes) of Austria

Oath of one of the neophyte knight 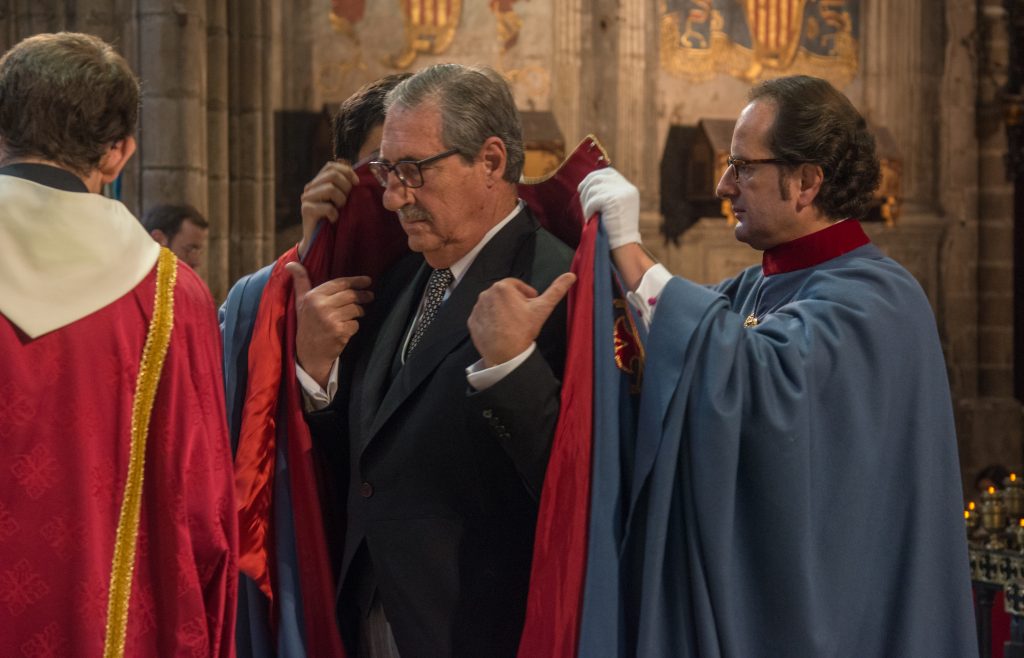 The Godfather helps the knight with the cloak 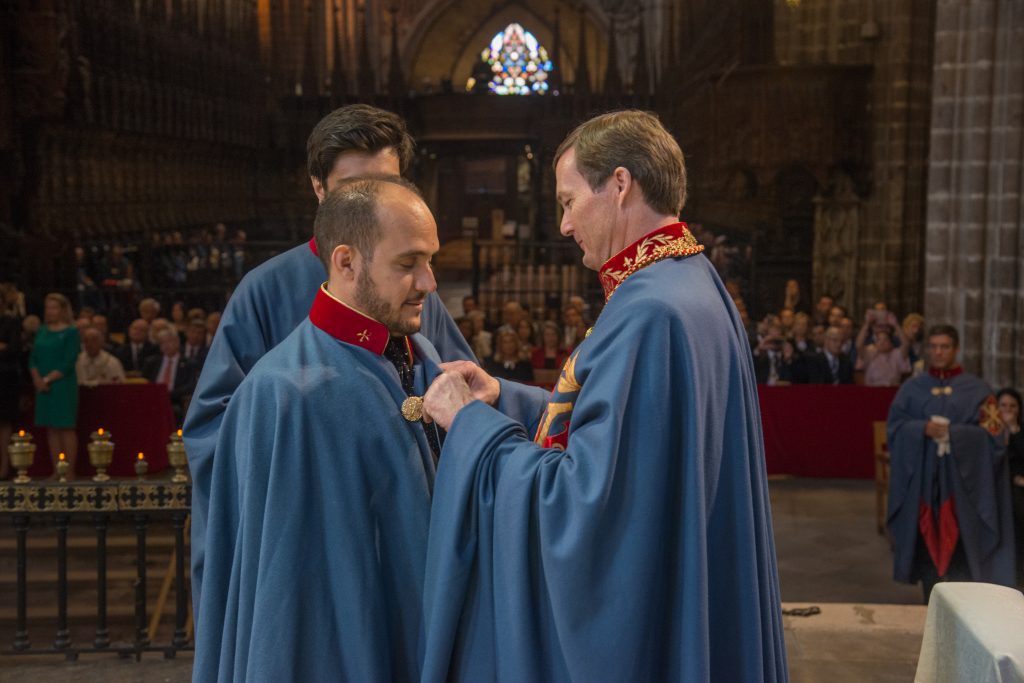 The Grand Master knots the mantle fittings to the new knight 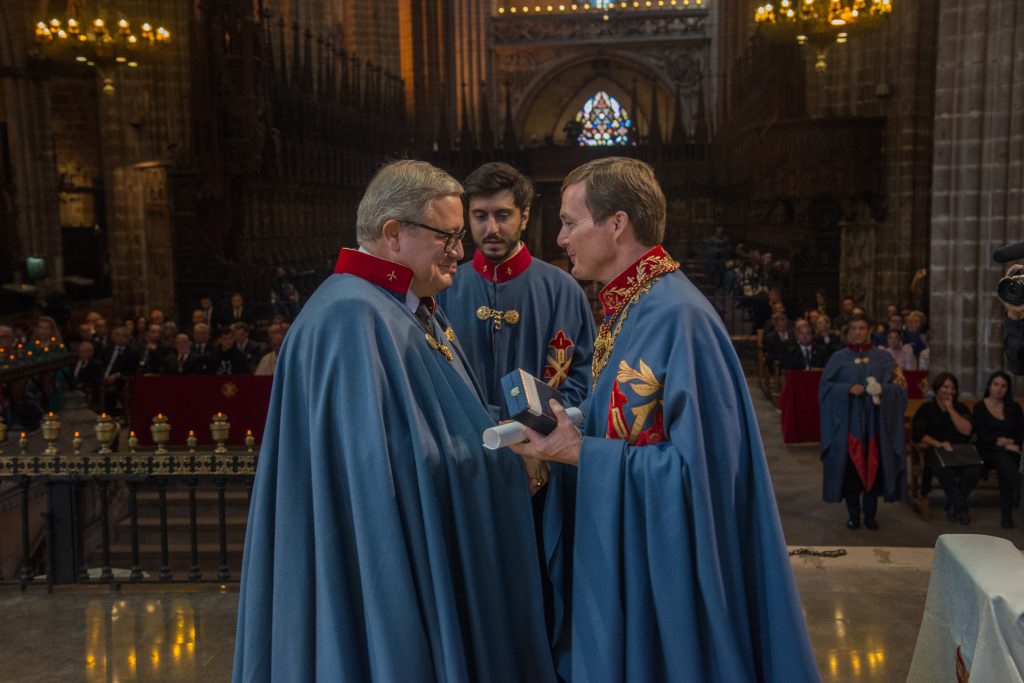 The Knight receives diploma and badges from the Grand Master

The Chaplain receives the insignia of the Great Master

In addition to these institutional representatives, other titles of the kingdom were present (such as the Marquesses of Foronda, G. of E., the Counts of Carlet or the Dowager Countess of Sant Llorenç de Munt), an important number of knights and dames of the orders and corporations mentioned above, also members of the Brotherhood of Our Lady of Mercy, the Board of Brotherhoods of the Holy Week of Albacete, and more generally numerous members of Barcelona, Spain and Europe’s society. 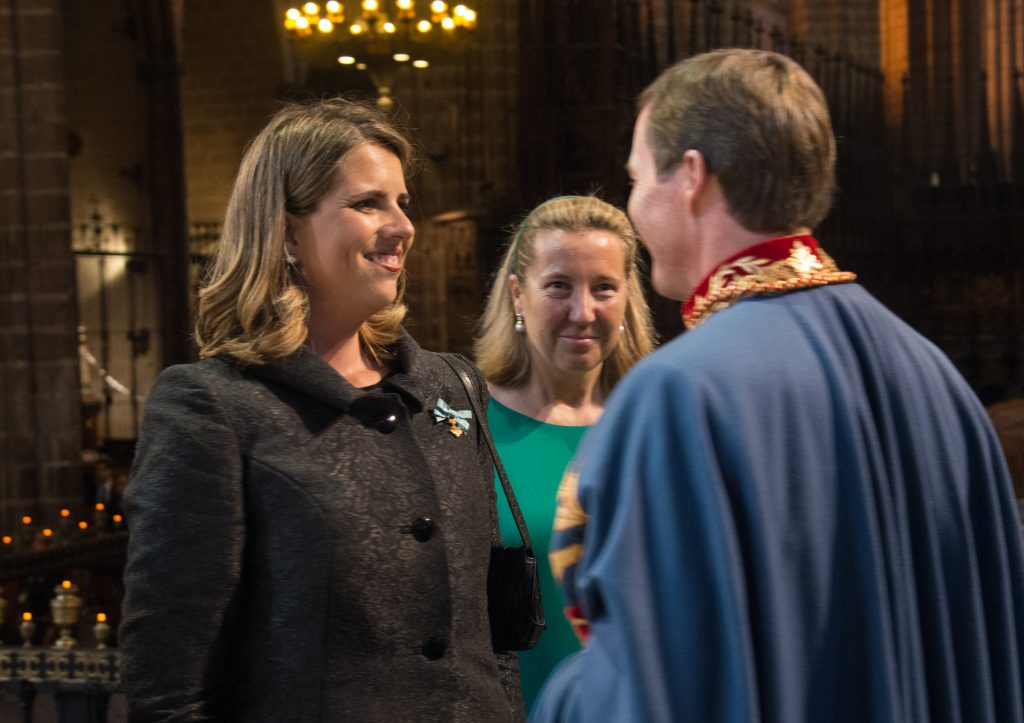 The Duchess of Cardona after having been imposed the badge of Dame of the Order. 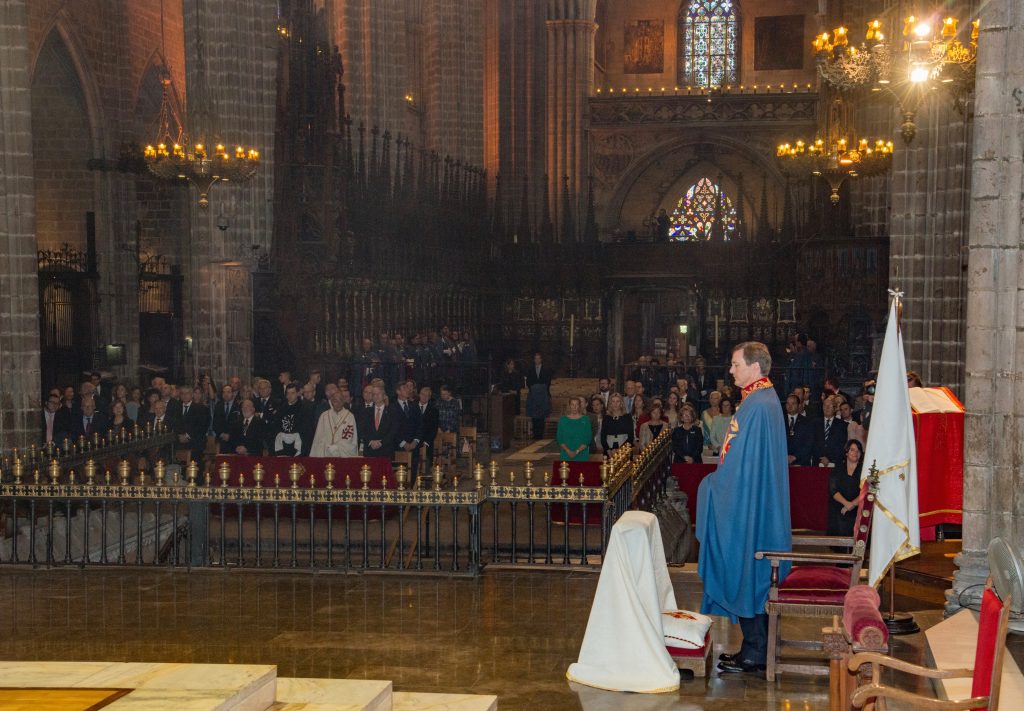 View of the Grand Master from the presbytery

The Delegate of Aragon, one of the participants in the pilgrimage of the Jubilee of Mercy, receives the honorable medal

After the solemn blessing, TRH The Grand Master and the Grand Chancellor, accompanying the Hon and Most Rev. Vice-Grand Prior and followed by the Constantinian clergy, went to the Constantinian Chapel of Visitation, to venerate the Relic of Saint George Martyr, Patron of the Order.

Acting as Masters of Ceremonies, the Secretary of the Royal Commission for Spain and the master of ceremonies of the Delegation of Catalonia, Mst. Il. Mr. D. Víctor Barrallo y Celma. As Masters of ecclesiastical ceremonies, the Ils. and Rvds. Mr. Eduardo Alonso y Morala and Mr. Alfonso Pérez y Guarinos.

The ensemble Brillant Magnus and the Choir Francesc Valls, titular choir of the Cathedral, played the musical pieces heard in the ceremony. 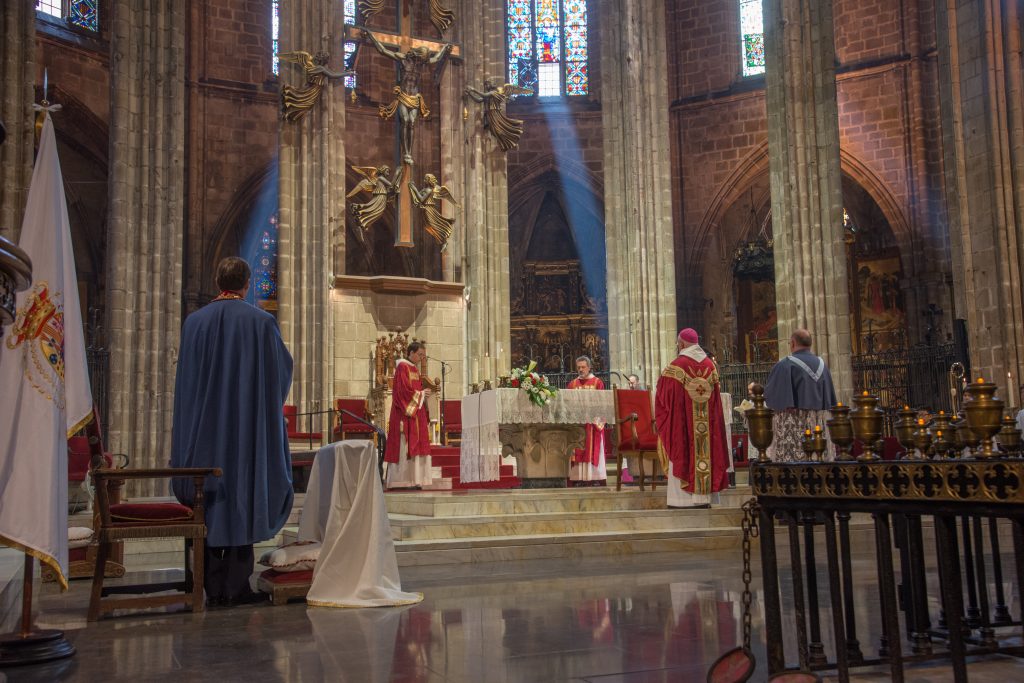 Moment in which the Tedeum sings at the ceremony 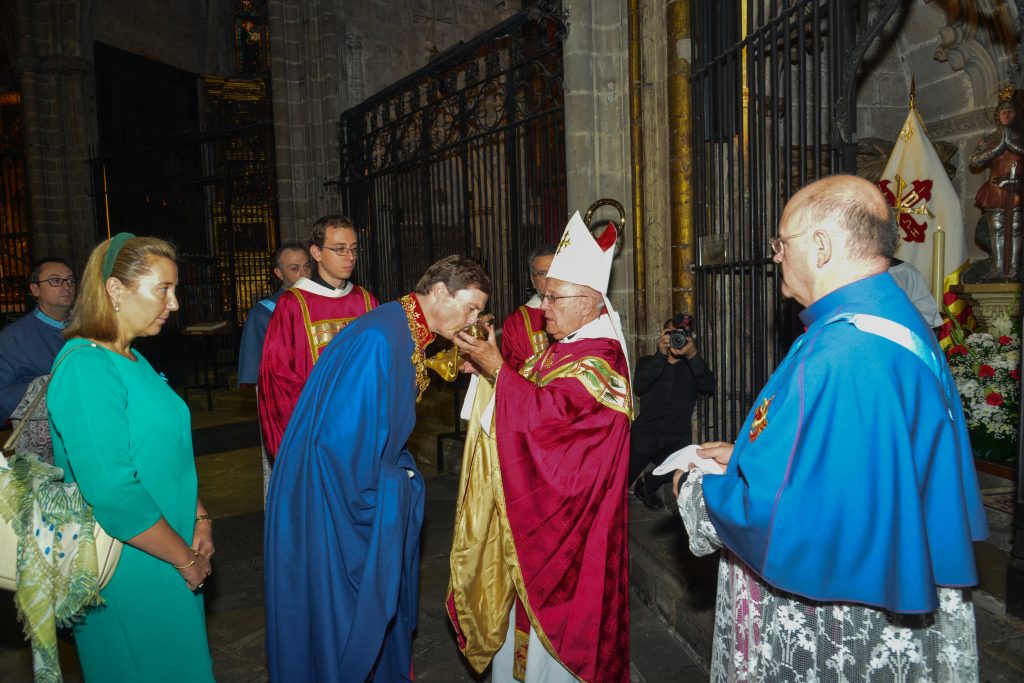 The Grand Master worships the relic of St. George

HRH Princess Cristina, Grand Chancellor, venerating the relic of Saint George in the Constantinian Chapel of the Visitation 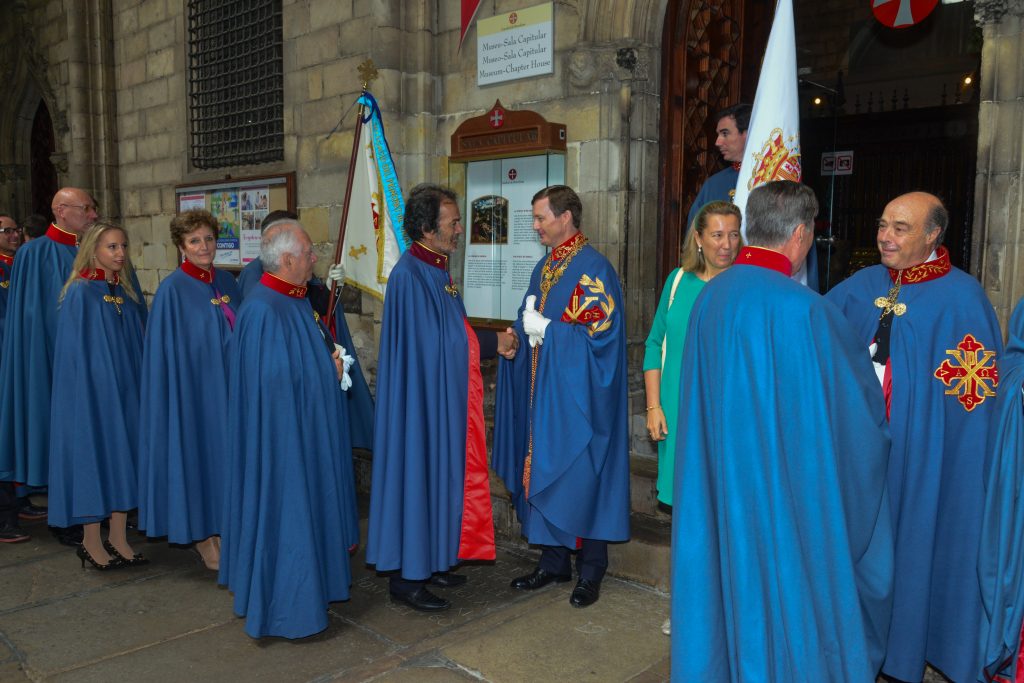 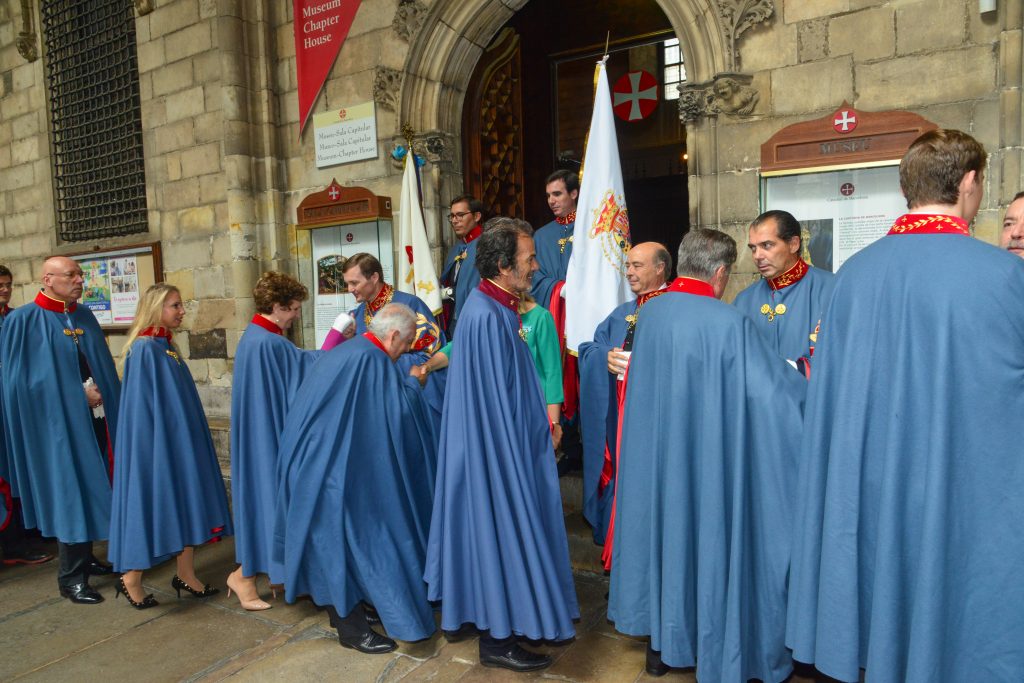 Then there were a long Baisemain in the cloister of the temple, in which all attendees to the ceremony could greet the Grand Master and the members of the Royal Deputation.

After the ceremony a cocktail was served followed by a lunch at the Hotel Le Méridien.

At the lunch, HG The Duke of Hornachuelos, President of the Royal Commission for Spain, proposed a toast in which he paid an emotional tribute to the memory of the late Grand Master (whose death was two years ago on 5th October), recalling the work of His wife, the Dowager Duchess of Calabria, HRH Princess Anne of France. He also welcomed the 15th anniversary of the Delegation of Catalonia, dean of the Spanish delegations of the Order and one of the most active in the Sacred Militia, recalling how the Order’s first investiture ceremony in Spain had taken place at the time of the creation of this Delegation in the Cathedral of Barcelona, in 2002. He also addressed some words to the new members of the Order, reminding its vocation and its duties. Finally, he toasted to the health of the Sacred Militia, the Grand Master, Spain, and HM The King Don Philip VI. 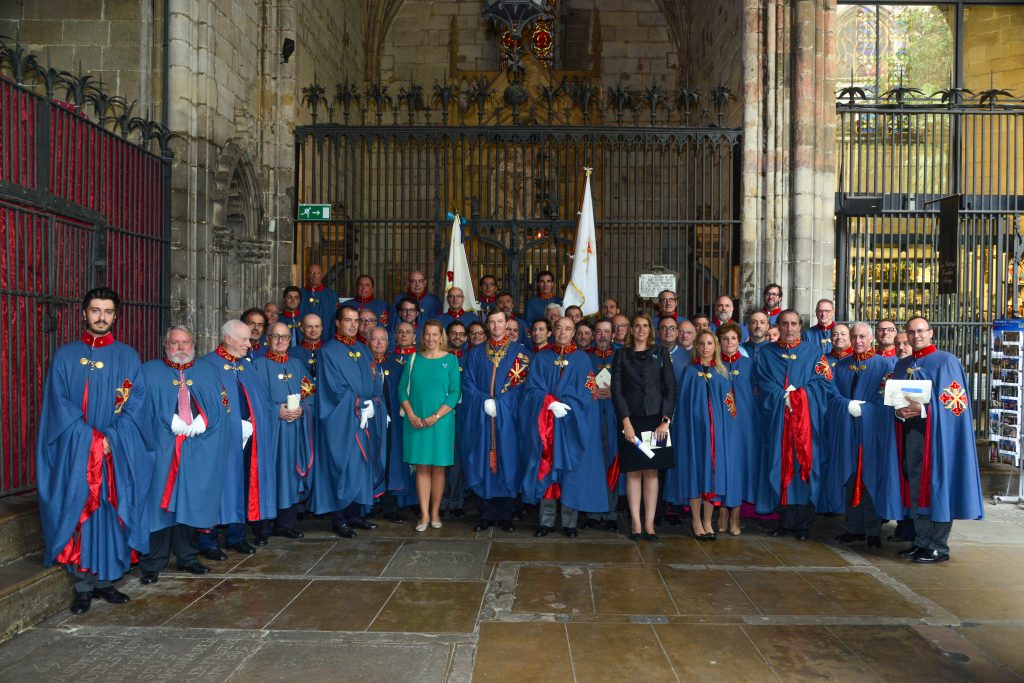 After lunch, the day ended with a corporate visit to the Exhibition “Charles of Bourbon. From Barcelona to Naples “, organized by the Order and can be visited in the Palace of the Viceroys (historical headquarters of the Archive of the Crown of Aragon).