The Order’s Pilgrimage to Rome for the Holy Year, 2016 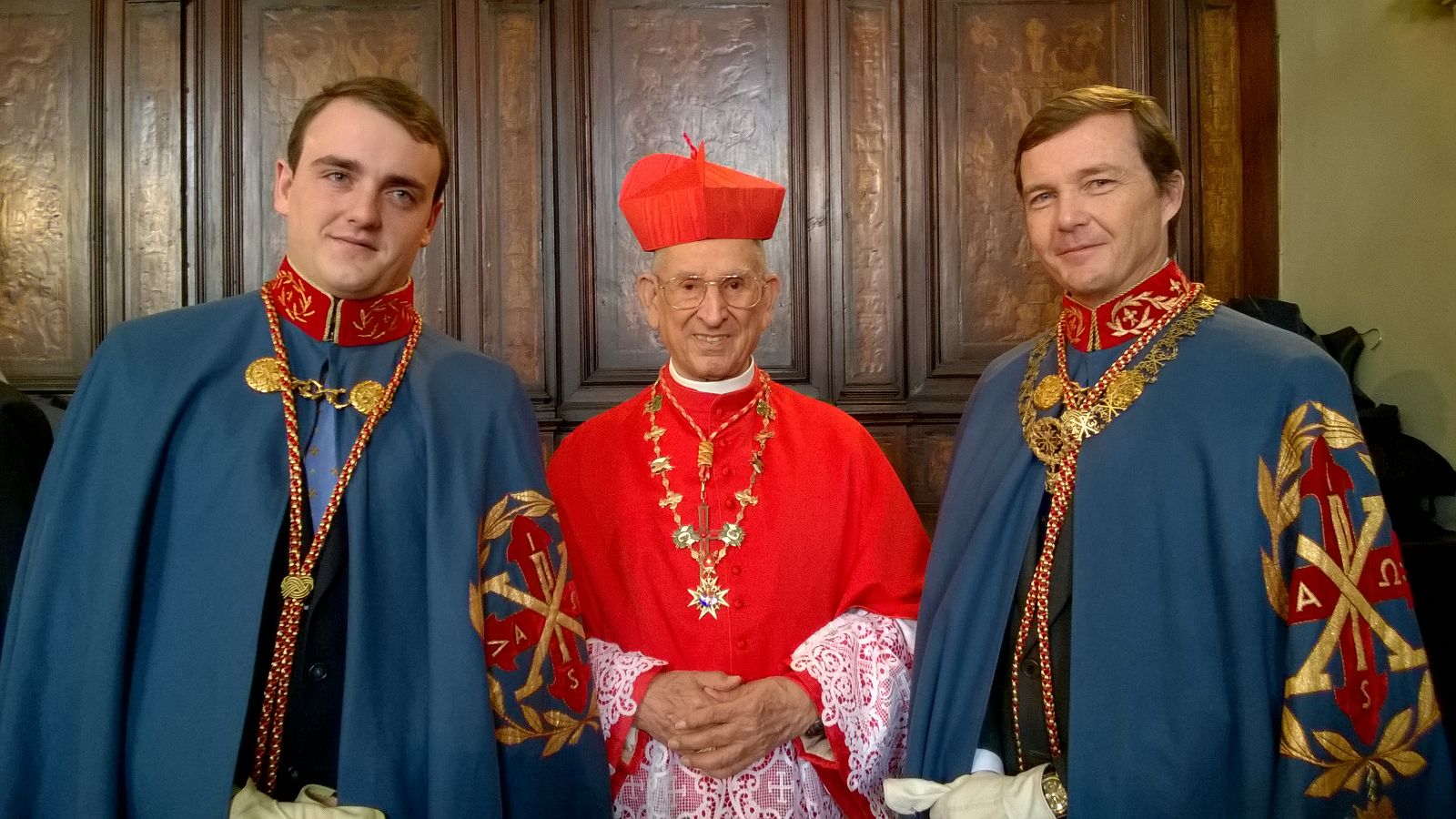 This began with the arrival of the Their Royal Highnesses the Duke of Calabria and Duke of Noto accompanied by senior officers of the Order in Rome on the evening of the 13th April. That evening a dinner was given in their honour by His Excellency Don Eduardo Gutiérrez Sáenz de Buruaga, Ambassador to the Holy See and the Order of Malta at the Embassy of Spain in the Piazza di Spagna.

The following day His Most Eminent Highness Frà Matthew Festing, Prince and Grand Master of the Order of Malta, received Their Royal Highness at the Grand Magistral Palace and invested the Duke of Noto as a Knight of Honour and Devotion in the Order. The Prince and Grand Master subsequently offered a luncheon for Their Royal Highnesses which was attended by Their Excellencies the Grand Commander, the Grand Hospitaller and the Receiver of the Common Treasure, the President of the Italian Royal Commission of the Constantinian Order Duke Don Diego de Vargas Machuca, the President of the British Royal Commission Don Francesco Moncada of the Princes of Paternò, and Marchese Narcisio Salvo di Pietraganzili were among the guests. Later that afternoon HRH the Duke of Calabria paid a call on Onorevole Dario Franceschini, Minister of Culture Goods and Ativities. 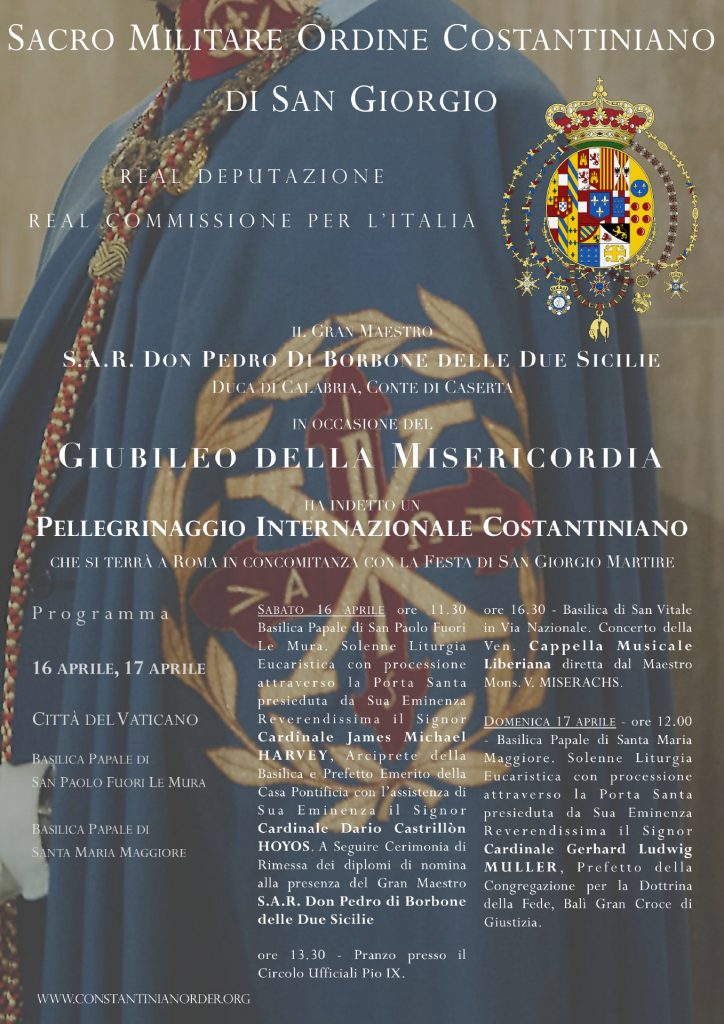 In the evening a dinner was given at the Palazzo Aldobrandini in honour of the Their Royal Highnesses at which Her Royal Highness Princess Anne of Orleans, dowager Duchess of Calabria, and Her Royal Highness Princess Ines of Bourbon Two Sicilies accompanied by Michele of the Marquesses Carrelli Palombi, were present. Others who attended included Their Excellencies the Ambassadors of the Kingdom of Spain to the Italian Republic, to the Holy See and of the Republic of Peru to the Holy See, His Eminence the Most Rev Dario Cardinal Castrillon Hoyos, Grand Prior, Ambassador Alfredo Bastianelli, Ambassador Nobile Amadeo De Franchis, N. H. Don Flavio Borghese, of the Princes Borghese, Delegate in Rome of the Order, Don Riccardo Paternò, of the Dukes of San Nicola, Count of Montecupo, Marquess Narcisio Salvo di Pietrazangilli, Count Enzo Capasso Torre delle Pastène (President emeritus of the Deputation), General of the Guardia di Finanza Francesco Greco, Advocate of the State Mario Antonio Scino (and consort), Prince Scipione Borghese and Princess Barbara Massimo Borghese, Don Amadeo Rey y Cabieses (Vice-Grand Auditor), Don Florencio Alvárez Labrador (Secretary General of the Deputation), and Nobile Angelo Federico Arcelli.

On Friday 15th April Their Royal Highnesses travelled by car to the Royal Palace of Caserta and following their visit were entertained at luncheon by Don Riccardo Paternò of the Dukes of San Nicola, Count of Montecupo. Upon their return to Rome HRH the Duke of Calabria received the Archbishop Castrense, Spanish Military Ordinary, HE the Most Rev Monsignor Santi Marciáno.

That evening a dinner was given in honour of Their Royal Highnesses at the Circolo della Caccia.

Saturday 16 April, 11.00AM: Solemn Mass at the Papal Basilica of St. Paul Outside the Walls, including the passage through the Holy Door. The Mass was celebrated by His Eminence the Most Rev James Michael Cardinal Harvey – Archpriest of the Basilica and Prefect Emeritus of the Pontifical Household assisted by the Grand Prior of the Order, His Eminence the Most Rev Dario Cardinal Castrillon Hoyos.

At the end of the celebration, His Royal Highness Don Pedro of Bourbon- Two Sicilies and Orléans, Duke of Calabria, Count of Caserta, Grand Master, presented diplomas appointing or promoting the new Italian knights. Following the ceremony a luncheon was offered in the Pio IX Officer s Club of Rome. On Sunday 17 April, at 12.00 noon there was a further Mass, with passage through the Holy Door, celebrated in the Papal Basilica of Santa Maria Maggiore by His Eminence Gerhard Ludwig Cardinal Müller, Prefect of the Congregation for the Doctrine of the Faith and Bailiff Grand Cross of Justice.

Their Royal Highnesses departed from Rome later that evening. 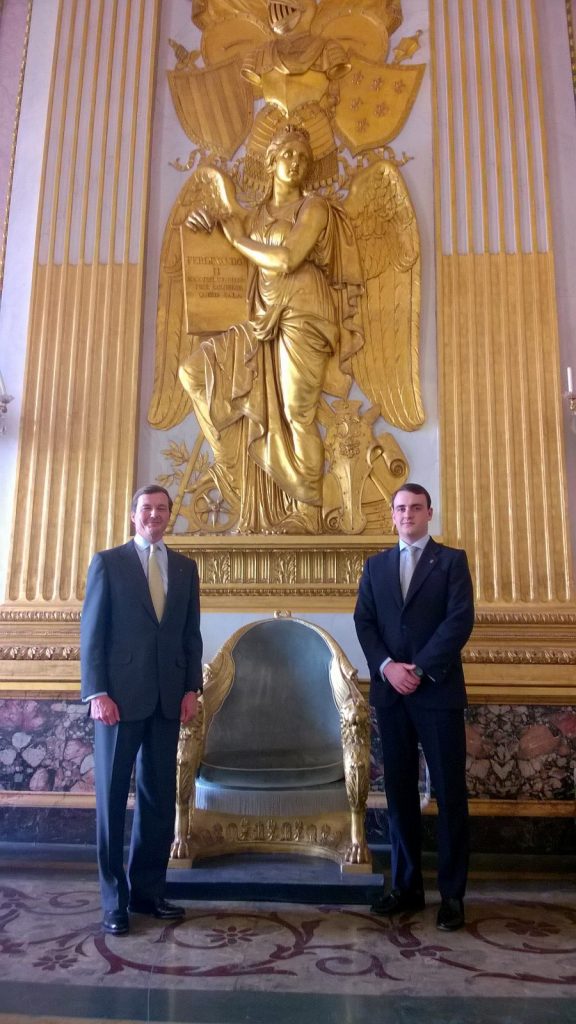 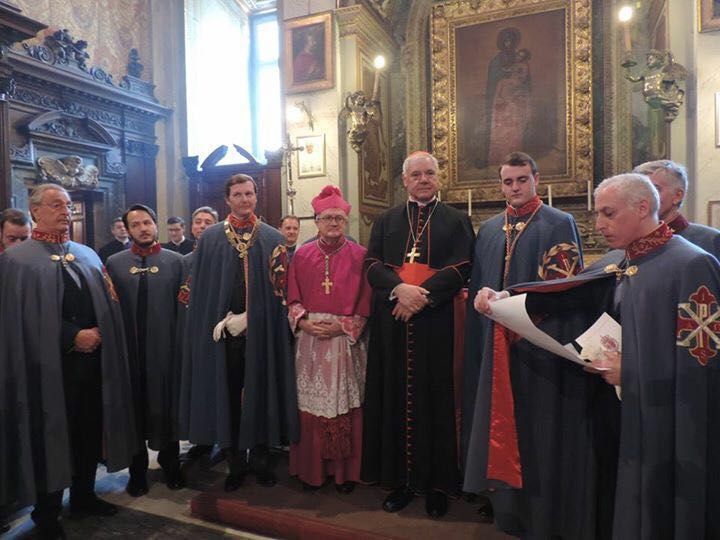 HE Don Amadeo Rey y Cabieses reading the diploma appointing HE the Most Rev Monsignor Enrico dal Covolo, Rector of the Pontifical Lateran University a Grand Cross jure sanguinis of the Order, in the presence of TRH the Duke of Calabria and the Duke of Noto, His Eminence the Most Rev Gerhard Cardinal Muller, and (at far left) HE Duke Don Diego de Vargas Machuca, President of the Italian Royal Commission. 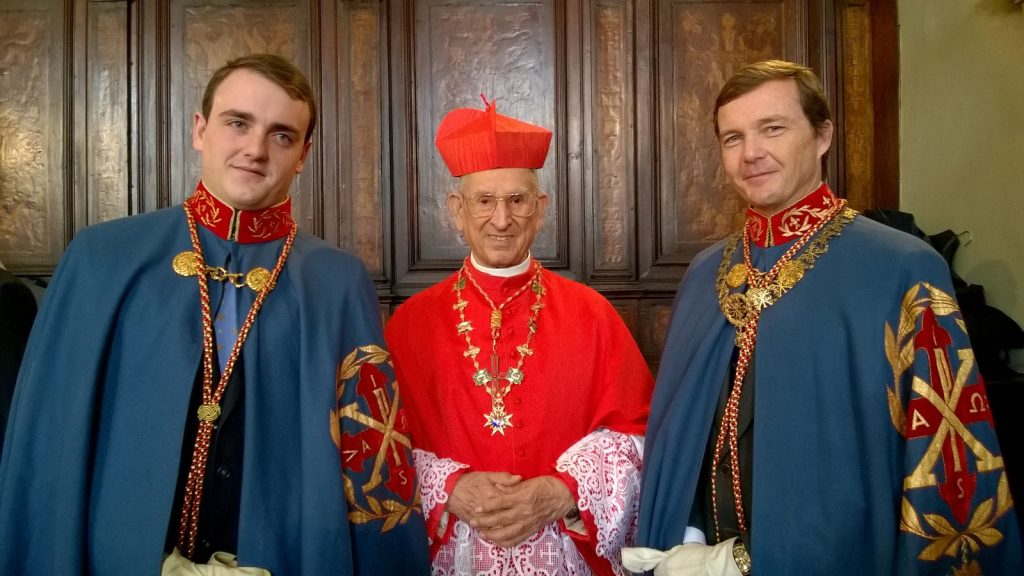 Their Royal Highnesses the Duke of Calabria and Duke of Noto with His Eminence the Most Rev Dario Cardinal Castrillon Hoyos, Grand Prior of the Constantinian Order, who had been invested earlier in a private ceremony with the Collar of the Most illustrious Order of Saint Januarius 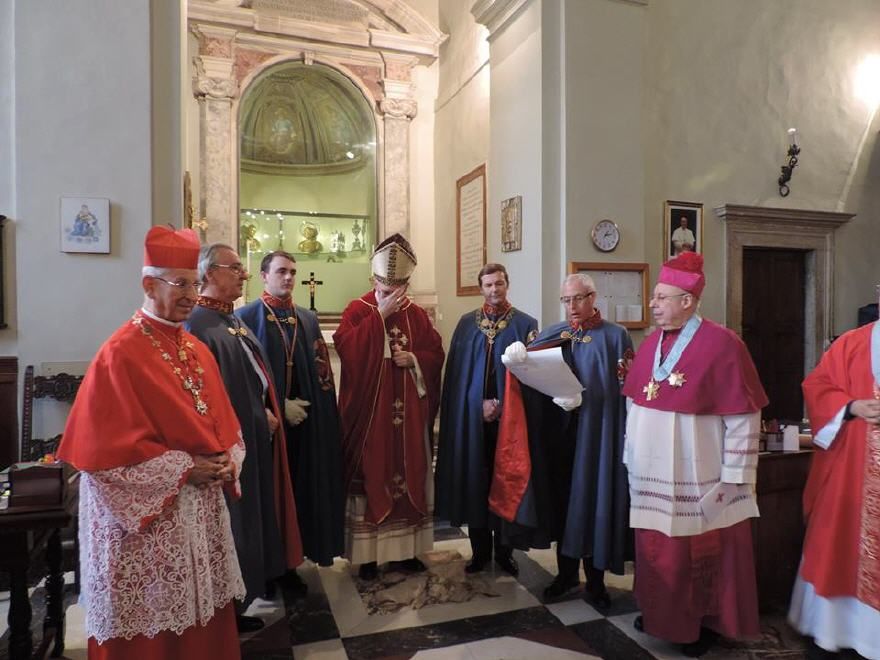 His EJames Michael Cardinal Hervey, Prefect Emeritus of the Pontifical Household, is accorded the Bailiff Grand Cross of the Constantinian Order by His Royal Highness the Duke of Calabria, accompanied by the Duke of Noto and with His Eminence Dario Cardinal Castrillon Hoyos, Grand Prior, present. The diploma is read by HE Don Amadeo Rey y Cabieses, Vice-Auditor-Generalminence . 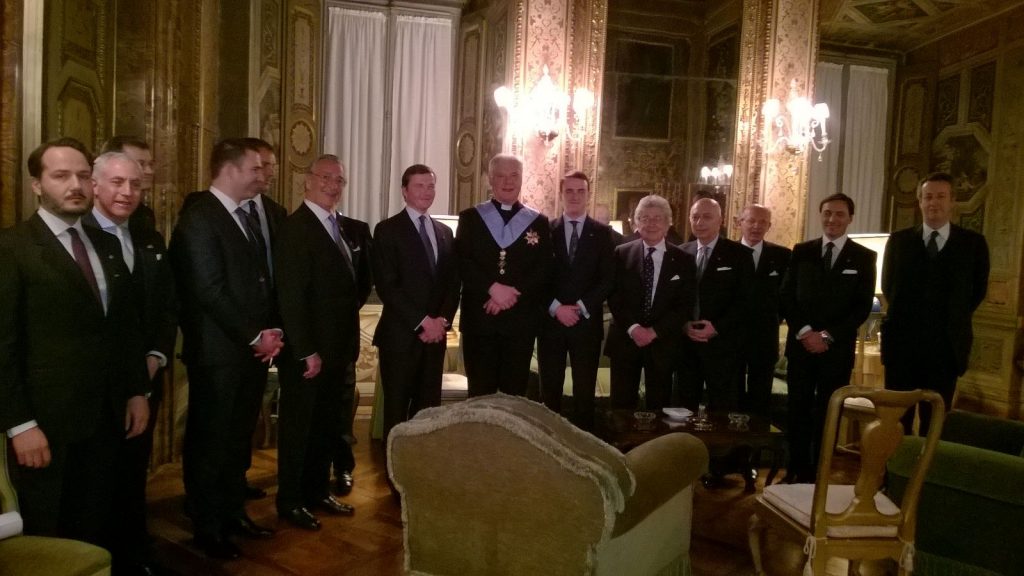 The investiture of His Eminence Gerhard Ludwig Müller as a Bailiff Grand Cross of Justice in the Circolo della Caccia, Palazzo Borges, on 15 April 2016. 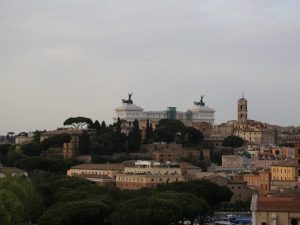 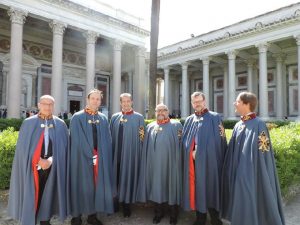 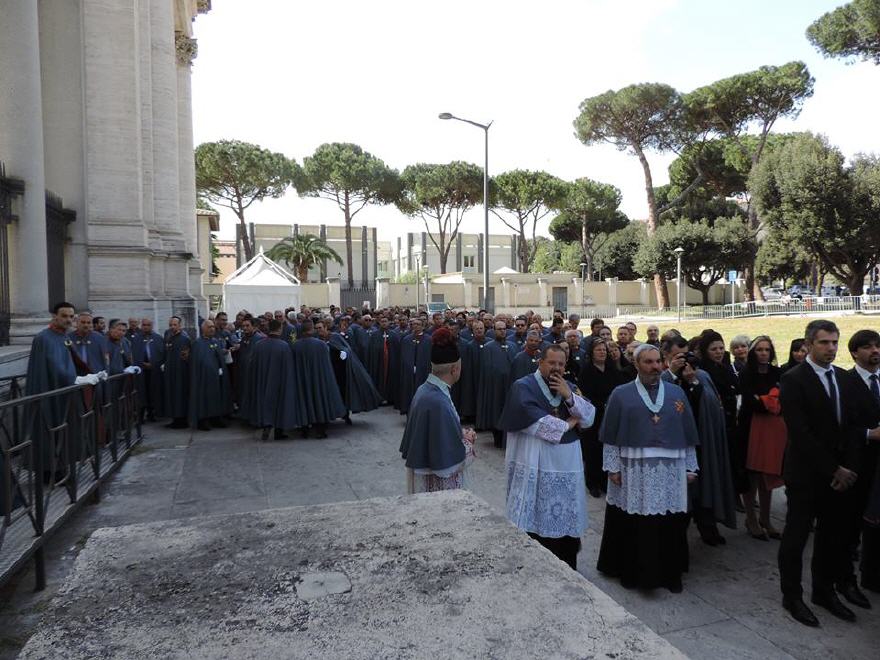 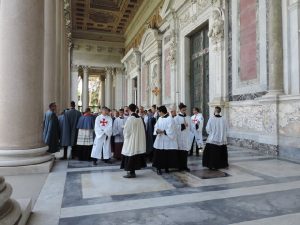 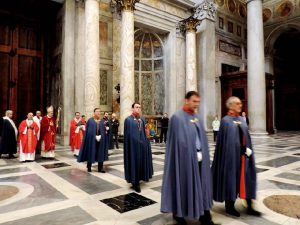 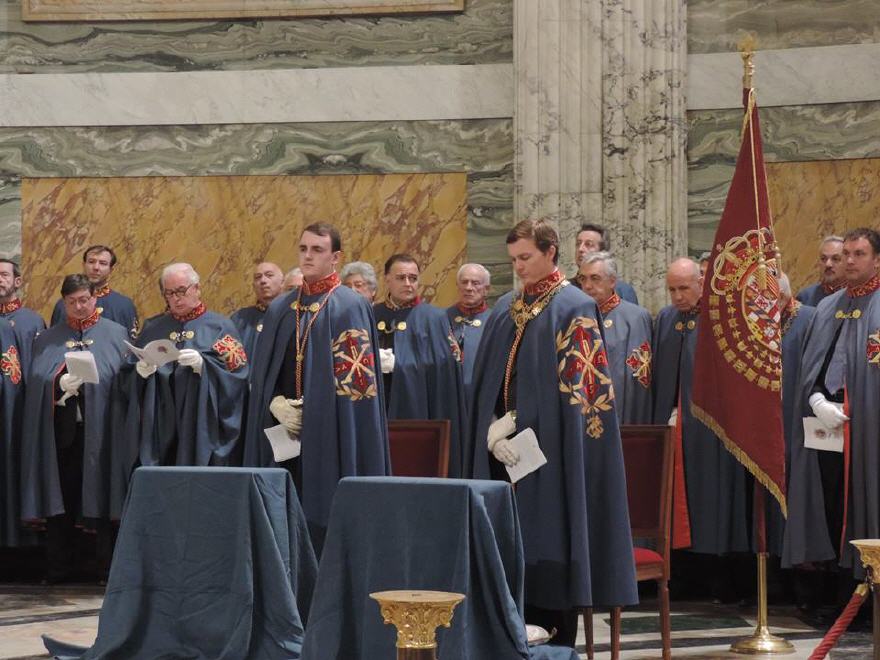 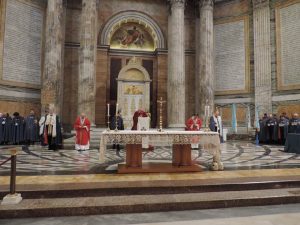 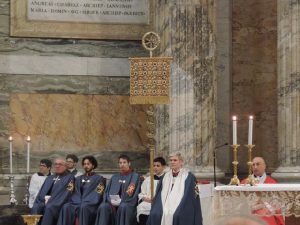 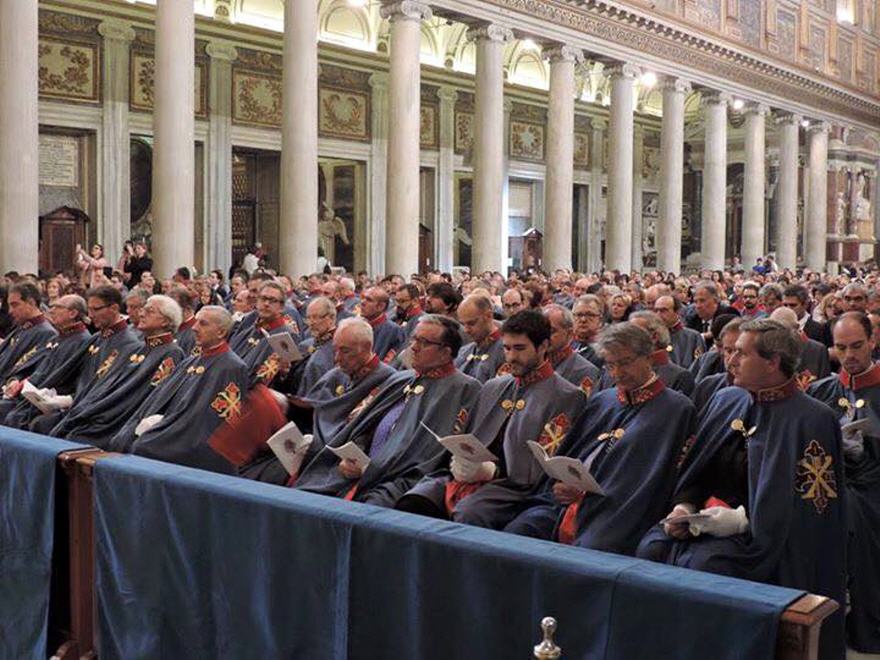 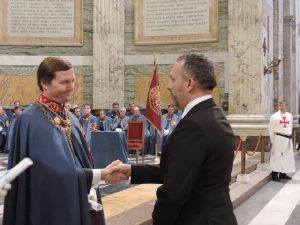 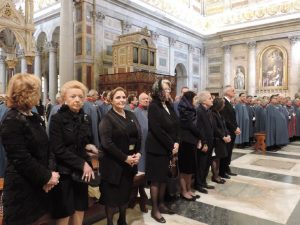 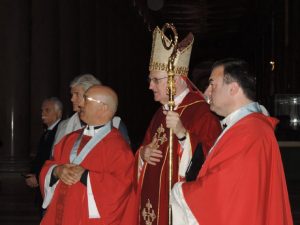 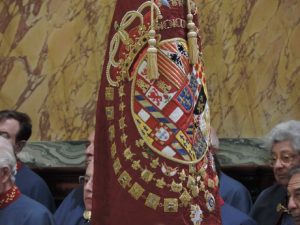 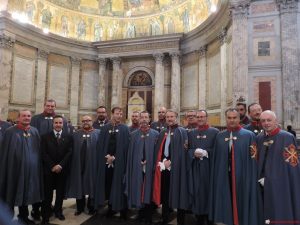 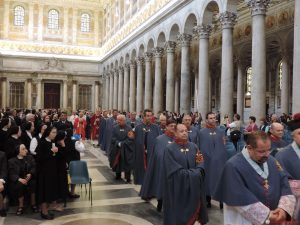 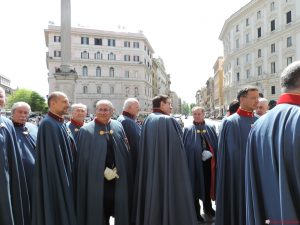 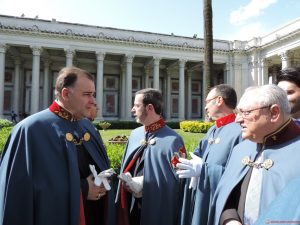 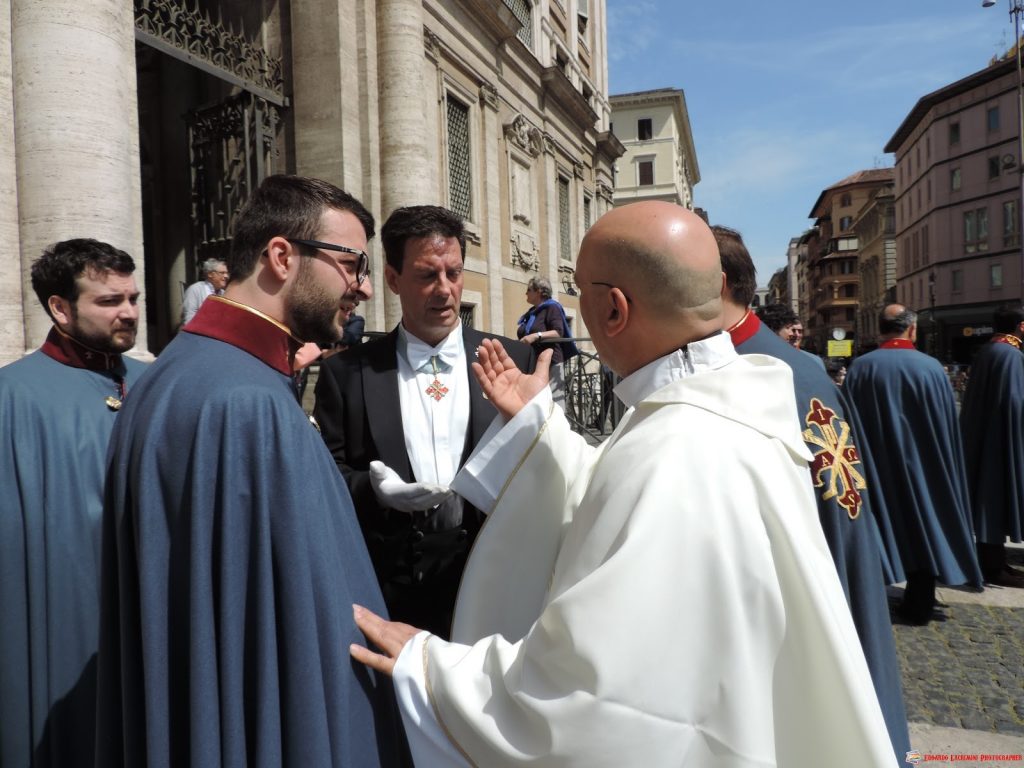 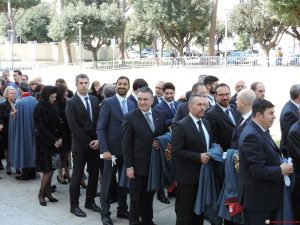 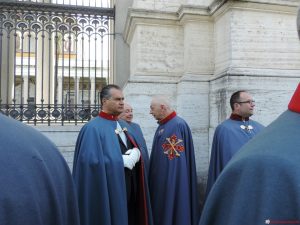